You can clearly observe a great combination of handling and power which is made by Bajaj along with KTM. It has a pocket-rocket performance, which gives a strong competition to other bikes in this segment. This bike comes with ABS which ensures your safety. Lightweight and powerful engine deliver high-quality performance.

The 309 Duke ABS is the most loving bike from KTM. The bike is featured with dynamic style that has grabbed much attention from the riders. The combination of black and orange colors adds more taste in the bike. Furthermore, the compact engine gives dynamic ride quality to the riders. Few of its pros are given below:

The bike has so much potential on the road in terms of performance, but the price of the bike is slightly higher than competitors in its category. And, the fuel consumption has another reason to deselect the bike.

The state of the art technology makes it a pleasure and dynamic machine. The company has adapted fastest technologies and latest equipment to make it more powerful than its rivals in its category. The bike is powered by a 375cc single cylinder engine that produces 43.5Ps power at 9000RPM and makes 35Nm of torque at 7,000RPM. All the power sent to the rear wheel via six speed gearbox. Thus, the fuel injection ensures for low fuel consumption without effecting on the performance and power. Few of its power to mileage are given below:

The lightweight frame makes it easy to maneuver in city areas. It comes with split seats that give plenty of room to the both rider and pillion. Moreover, it has a WP upside down suspension at the front and a mono-shock suspension at the rear that is ensured for a safe as well as better cornering all the time. Where, the large handlebar is too pretty much standard in the bike, which gives stress free ride during the long ride.

In the terms of safety, the company uses high safety equipment such as a lightweight tubular frame, telescopic forks, swingarm, disc-brakes and ABS technology ensures for safe ride as well as optimal control in any situations. Few of its safety features are given below:

The KTM 390 Duke ABS is the fastest performance naked street bike that comes with an ABS technology. The bike has a better value than 200 Duke. Thus, the pricing factor has another reason to have looked at this street bike. 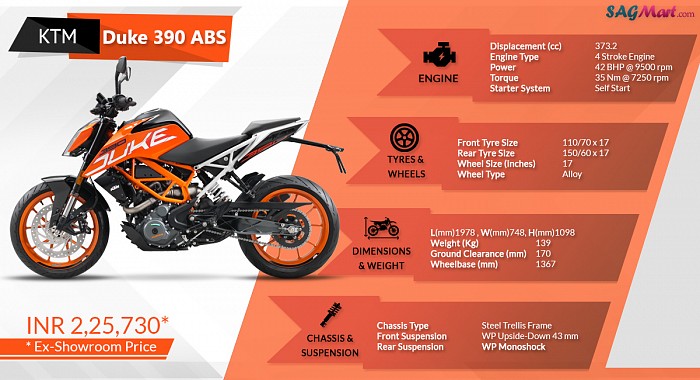