This powerful bike is equipped with ABS technology, which gives good mileage. This bike comes with comfortable seats to give an easy riding experience with comfortable handling. Fuel tank capacity of this bike is 16 liters. It has an attractive design with black matte color and gives more efficiency and comfort with super cool features.

The Apache 180 is a flagship motorcycle from the company in the Indian two-wheeler market. The bike has so much potential in the terms of power and performance. The Apache RTR 180 Matte Black features an all black matte body color along with a dynamic body graphics that gives a more splendid look to the bike. Few of its pros are given below:

TVS Apache 180 is the excellent bike for dynamic sporty riding and comes with Matte black color, while ABS is the most advanced feature of this bike. But at the certain point the bike may decelerate its popularity among its class. Few of its cons are given below:

Apart from the color and graphics, the technical profile of Apache 180 Matt Black is untouched. The bike is powered by the same 177.4CC four-stroke and cylinder engine that generates 17.3 BHP of power at 8500RPM and makes 15.5Nm of torque at 6500RPM, where the fuel economy is retaining the same as the last edition. The power is thrown to the ground via a five gear transmission. Few of its power to mileage features are given below:

The Apache 180 is a sporty bike that gets a narrower handlebar and curved seat that gives an effortless as well smooth ride over the open roads and city areas. The bike is featured with ABS technology that gives skid free ride over the wet and rugged road, while the advanced suspensions perform well with the hard braking.

The bike gets excellent safety equipment, which has never seen in the other bike in this category. The Apache 180 is featured with ABS technology that make it more capable of controlling the bike at the high speed under the sudden braking. Thus, it featured advanced headlight that gives sharp vision at the darken place even in all weather. Few of its safety features are given below: 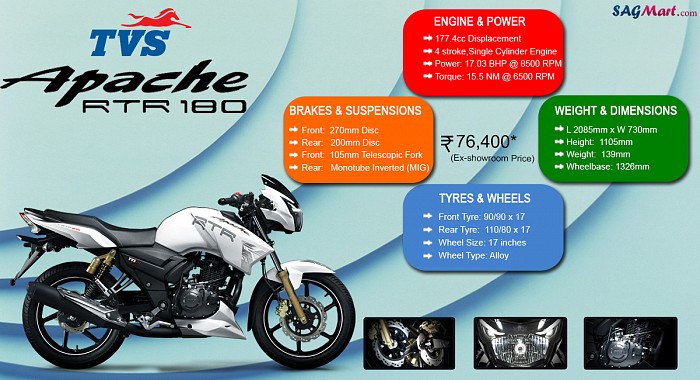