Hero Karizma is a bike with standard features. It is available in vibrant shades for more attraction. High class controlling power and effective handling of the bike will make you its fan in a single ride. So don't wait to go speedily with Hero Karizma with superhero feel.

What's Good
Back in 2003, when the Karizma was launched, it was one of those few sports bikes which had a performance engine along with the economy. Following are its good things.

What's Bad
Hero Karizma R has a good configuration which makes it shine apart from the crowd. However, some mistakes have been made by the manufacturer, which are as follows.

Power to mileage
Karizma R has got a robust 223cc engine, which has superb raw power to unleash every single pulse of its rider. At the same time, it feels so thirsty and effects the outgo. Following are its few clues.

Handling and riding
The seat height has been an issue for this bike, as it is counted within the category of sports bikes. But keeping the position of the foot rests makes things easier and the bike feels easy to cut through corners. Clip on handlebars add extra comfort to the rider while speeding high. Additional grip is provided by the broad tyres which work efficiently and supports at every bit of it.

Safety
Being a high performance bike, Stability is not an issue with Hero Karizma R, but the introduction of some advance equipments would have made it more suitable. Following points are worth considering.

Maintenance issues
Hero Karizma R is the first sports motorbike which is made by an Indian manufacturer. The initial times of its owners spent sleepless nights due to the mileage it produced. Later, some updates have been carried out over the bike which made it favourable to one’s reach, but till then the market has got so many products that Karizma started losing its fans. Maintenance is not a big issue as the manufacturer is Hero Motocorp.

Verdict
Hero Karizma R is few of those great products which have entered the market like a Bollywood superstar, but started fading with time and better equipped motorbikes in itS own and other segments. It's been many years since this bike has been working efficiently in India. It would be a good choice for performance freaks and quality cautious people. 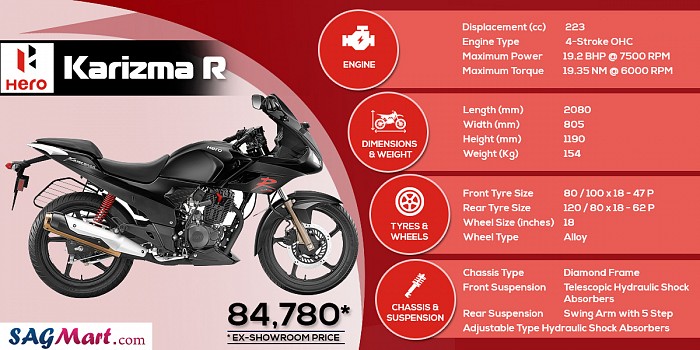