The Yamaha YZF-R15 S is a sports bike that redesigned with a single seat. R15 Version 2.0 is the second version of the existing YZF R15 that comes with new graphics. The motorcycle has made few changes as single seat unit and new graphics. The 150cc bike is blessed with broad tires, front fairing, twin headlamp and advanced brakes. The powering of the quarter-liter bike comes from its substantial motor which delivers a dynamic performance.

Yamaha Motor has a number of iconic models in its portfolio that consist of commuter, sports bike and scooter. Featuring with Yamaha's reliable technology, all the products deliver excellent riding performance as well as dynamic ride quality. The Yamaha YZF R15 S has made its come back again in the Indian two-wheeler market as the second version of YZF R15 is featured with single unit seat and has received new color scheme that gives a magnificent look to the motorcycle. Some of its pros are given below:

It is pretty much good if the YZF R15 S is equipped with the Anti-lock Braking System, but it is not effect on its its popularity. Few of its cons are given below:

All the models are breathed by Yamaha's outstanding technology. The Yamaha YZF R15 S is powered by a single cylinder liquid cooled and 149.8cc engine displacement. The fuel injected and four-stroke motor return a maximum power output of 16.8 BHP at 8,500 rpm and a peak torque of 15 NM at 7,500 rpm. The engine is mated to a six-speed transmission. Moreover, the motorcycle is inspired by Yamaha's racing DNA that boosts the performance of the motorcycle. Some of its power to mileage features are given below:

The YZF R15 S is featured with a single unit seat instead of split seats, which provides comfortable sitting position to the both rider and pillion. The handling quality remains the same as it has compact handlebar that provides sportier riding position to the riders. The lightweight chassis endows an excellent stability on the high speed.

The YZF R15 S is featured with a list of dynamic safety features which are ensured for a safe and comfortable ride. The broad rear tyre makes it potential for the all types of road condition. The motorcycle is featured with a front and rear disc brake which provide excellent braking performance, while the suspension setup at the both front and rear section make the handling quality excellent. Few of its safety components are given below:

If the maintenance is considered, the commuter motorcycles of the firm are the best because the products are not equipped with the standard components such as you can easily maintain the motorcycle on your level. The Yamaha YZF R15 S is featured with a compact engine that only required least care. Apart from this, the spare parts of this brand are little bit higher than other motorcycles.

The Yamaha YZF R15 S is the upgraded version of R15 which is featured with new livery and single unit seat. The price of the new version remains the same as the R15 Version 2.0. 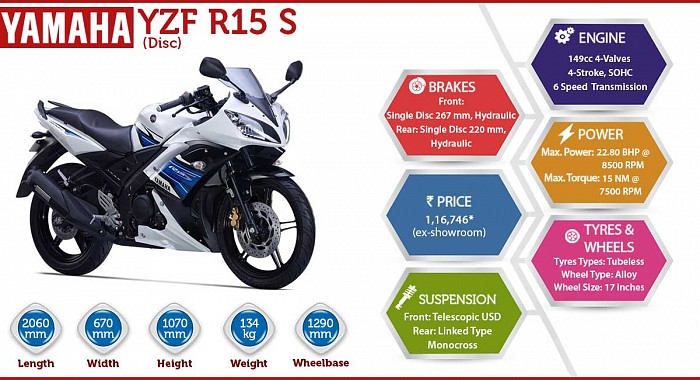