Samsung Galaxy J7 Prime comes with quite impressive features and fingerprint sensor. The device is powered by a 1.6GHz Octa-core processor along with 3GB of RAM and 16/32GB internal storage, expandable up to 256GB using microSD card. It houses 3300mAh Non-removable Li-ion Battery and sports a 13-megapixel rear camera along with 8-megapixel selfie shutter. The device runs on the Android Marshmallow 6.0 Operating System. On the connectivity front, it offers 4G, 3G, Bluetooth, microUSB, Wi-Fi options.

The Galaxy J7 Prime has an all-metal unibody design - top and base closures being made of plastic with a brushed metal finish to fit the antennas - with bended 2.5D glass on the front. In typical Samsung fashion, the smartphone accompanies a front-mounted physical home button that serves as a fingerprint scanner. The home button is flanked by touch-based capacitive buttons which are non-illuminated. The most smartphones under Rs 20,000 tend to appear to be the same nowadays.

The J7 Prime accompanies a 5.5-inch Full-HD IPS LCD display with a 1080x1920 pixels resolution which provides 401 ppi pixel thickness. There's no choice to manually correct the color saturation, however, the handset gives you an Outdoor Mode choice to physically up to the smartphone's brightness levels for when you're out in direct daylight.

The J7 Prime operates on Android 6.0.1 Marshmallow-based TouchWiz UI. It is still a long way from flawless, but Samsung is making a decent attempt to eliminate bloat or undesirable applications. Software inside the J7 Prime is a quite standard Samsung, yet what sets its J-series smartphones separated from its different handsets is a set of extra software that it consolidates to make the life of a normal user more 'innovative' and 'meaningful'.

Samsung is putting forth two key components to sell its new Galaxy J smartphone: S Power Planning and S Secure. The S Power Planning is basically a battery saving feature that permits users to save the mobile's battery for calls by assigning a specific rate of the battery for calls and messages. It also allows users to extend the phone's battery time to up to twice the current available time and also forward calls when it is running low on juice.

The Galaxy J7 Prime is powered by a 1.6GHz octa-core Exynos 7870 processor clubbed with 3GB RAM and 16GB of internal storage which is further expandable up to 256GB via microSD card. The dual-SIM smartphone supports 4G VoLTE and USB OTG. The handset comes with separate slots for two SIM cards and one microSD.

The J7 Prime is a very capable performer, spearheaded by a mid-range processor (built by Samsung itself) which also focuses on efficiency and 3 GB of RAM that can be quite a handful at its price point. This is, again, one more instance where Samsung has tried to up the premium quotient of this J-series smartphone. The J7 Prime is fairly well powered for its price, unlike previous J-series smartphones that served mediocre specs to buyers.

The smartphone has been backed by a 3,300mAh battery which is non-removable. Battery life is fantastic and lasts for one whole day barrier with ease. Extreme usage scenarios got us close to 14 hours on the J7 Prime. Samsung has practically overloaded the smartphone with fancy power-saving features, and some of them actually work well in extending the battery life considerably, even when it is dangerously low on juice.

The Galaxy J7 Prime sports a 13-megapixel camera on the rear with f/1.9 aperture, autofocus and LED flash. On the front, you get an 8-megapixel camera, also with LED flash. First things first, I was pleasantly surprised with the phone's rear camera, especially its quick focus locking and shutter speed. The rear camera of the Galaxy J7 Prime is really fast, even in indoor lighting conditions. As for picture quality, the J7 Prime can take some really good photos in outdoor good lighting conditions. Photos shot in such situations come out well with lots of detail and colors that are mostly true to the source. Images clicked in tricky light situations also boast of enough detail, although some noise does creep in as the intensity of light decreases.

While significant innovations still frame the foundation of Samsung's new J-series smartphone, the Galaxy J7 Prime is a complete different breed. It is more premium and accompanies a heftier spec-sheet and costs Rs 16,900 to the buyers. While the design is subjective, a little bit of premium is always a plus to have and grab. The smartphone has a solid screen and capable performance. There's no overheating and battery life is phenomenal. Obviously, the cameras could have been better (particularly in low light) and the product could have been lighter. But, there will always be a 'what if' with any smartphone. The J7 Prime, like most smartphones, isn't perfect. But it does the job, and it does the job quite well. 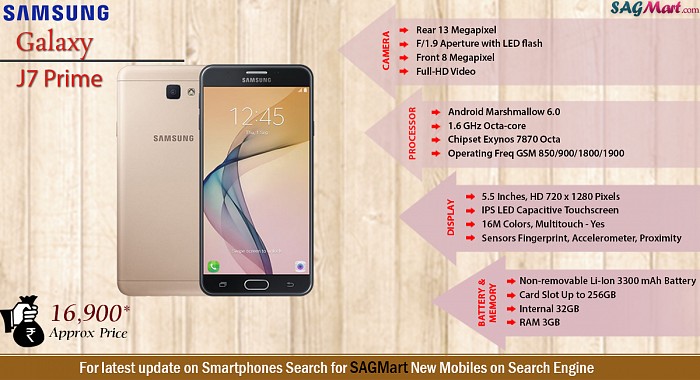