An image of the speculated 2017 Yamaha R25 has rendered online via a Japanese media house- Young Machine. It is likely to be crafted on the basis of leaked information from insiders. As the Yamaha has recently launched its updated YZF-R15 Version 3.0 in Indonesia, the automaker might be in the process of current models update. Consequently, it can also roll out a revised iteration of the YZF-25, which could look somewhat like the rendered model.

Design-wise, the surfaced picture is presenting a sportier stance, owing to redesigned fairing and sharp styling cues. The motorcycle in question seems to follow new YZF-R6 design language along with worn livery from the 2017 Yamaha R3, available to purchase in the United States. Manufactured in Indonesia, the Yamaha R25 is mainly intent for the South-East Asia. 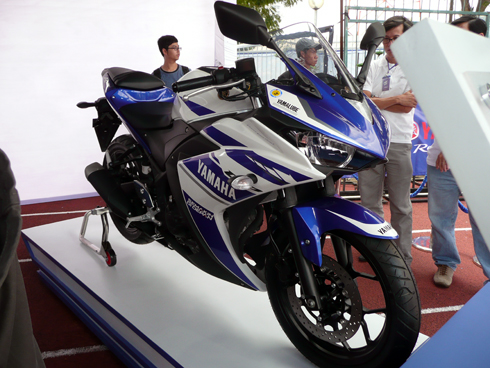 If considers the 2017 Yamaha YZF-R25 from the featured image, there are a host of alterations, can be seen on the full-fledged model. It may get a LED headlamp setup, USD front forks instead of conventional front suspension and disc brakes equipment with radially mounted brake calipers. Besides, a slipper clutch feature may also be there as the recently launched improved trim of the Yamaha R15 v3.0 gets this aid.

As expected, the YZF-R25 is likely to unveil in the second half of 2017, which clearly means that it may launch in India sometimes in 2018. By that time, ABS may become mandatory in the Indian market, so we can expect this advanced safety feature of ABS. Upon launch, the Yamaha R25 will rival with the Kawasaki Ninja 250, the recently launched Honda CBR250RR and the Suzuki GSX250R.