After the launch of India's most awaited sportsbike from TVS i.e. TVS Apache RR 310 recently, the Joint Managing Director, TVS cleared that the next bike in the offering is Apache RTR 160. In past two years, Apache series had seen two additions in the lineup, i.e. Apache RTR 200 4V and now recently launched Apache RR 310. But, the entry-level TVS Apache RTR 160 and RTR 180 are still in there initial phase and has not seen so much change in there appearance and engine specifications.

But now the TVS has decided to revamp it's Apache RTR 160 in a newer avatar which will be mostly based upon the Apache RTR 200 4V as spied from the testing sessions some time ago. The initial spy shots which were emerged online showed an agile bodywork, much similar to the Apache RTR 200 4V, including angular headlamp cluster. The chassis also seems to be revamped and now includes a mono-shock suspension setup at the rear, leaving the twin shock absorbers on the ongoing model. 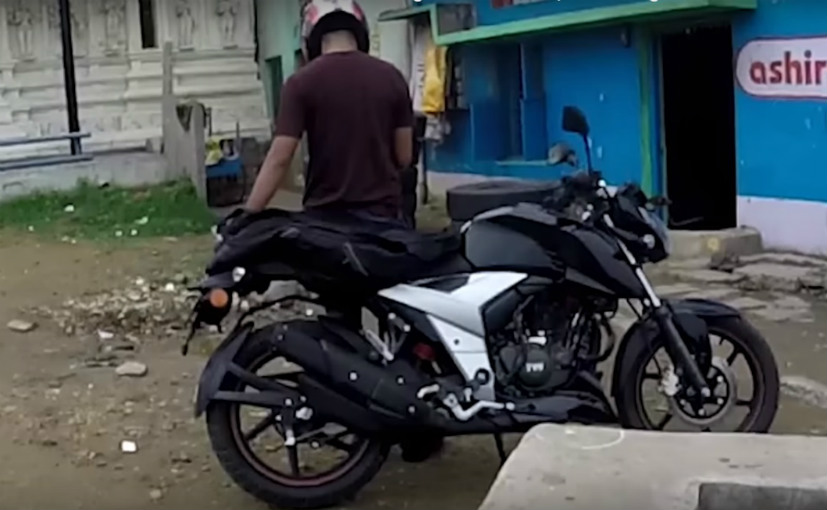 The spy shots also gave the idea of a single elongated seat and not the split seats which are normally present on the heavier and bigger bikes. The engine specs are still not known but talking about the current ongoing Apache RTR 160, it comes with a 159.7 cc single-cylinder engine tuned to produce 15 bhp and 13.1 Nm of peak torque and paired with a 5-speed gearbox.

It is also speculated that the new Apache RTR 160 can come with ABS as standard, going with a norm of government to make ABS as a standard feature on above 125cc from April 2018. Right now there are very fewer details on the bike, but it is expected that the TVS will launch its new bike in sporty appearance is likely to compete with Suzuki Gixxer, Honda CB Hornet 160R and the Bajaj Pulsar NS160.