While everyone is waiting for the next generation Audi Q7 to arrive in India, the automaker seems to have planned something more for its fans. As per some reports, the SUV has been spotted in its performance oriented avatar named SQ7 in the country. It is possibly the company's strategy to have a competitive edge over its rival models like BMW X5/6M and Mercedes AMG GL/ML 63 as the SQ7 comes packed with a powerful diesel engine under its hood. Both the upcoming offerings from Audi will differ not only in mechanical terms, but also on the cosmetic front. 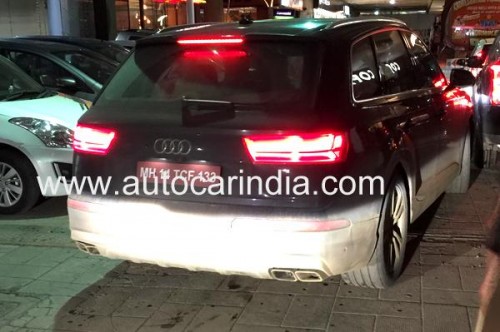 So, what is it that actually makes this SUV a superior one? Well, the powertrain has received a 4 litre twin turbocharged diesel unit that is tuned to make 430Bhp of maximum output. Further, the impressive acceleration enables the car to sprint upto 100 km/h from standstill in just 5.5 seconds with the speed electronically limited to 250km/h. Moreover, the spied images suggest that front & rear bumpers have been modified and four exhaust pipes are fitted at the rear that were not there in Q7.

Interestingly, the SQ7 has not been revealed even in the global market so that would mean it might take a while to arrive at Indian shores. However, some reports suggest that it's not confirmed whether it will make it to India at all. Well, as of now, one thing is sure that the next generation Q7 is going to be launched soon in the country.

Lifestyle Edition of Audi Q7 SUV and A4 launched in India
Views: 1434