Aston Martin has recently showcased its second Lagonda concept car, an all-terrain vehicle at the 2019 Geneva Motor Show. This is also the second Lagonda concept after the Vision concept car that has been revealed last year’s Geneva show by the British sports cars manufacturer. The car is expected to go under production garages of Aston Martin by 2022 at St Athan Wales.

Two mid-engine Aston concept cars called the Vanquish Vision, and AM-RB 003 has also been showcased alongside the Lagonda concept based all-electric SUV.

As discussed, the Lagonda concept is all-electric similar to the last years Vision concept of Aston Martin. Both the car concepts showcased by Aston Martin shares similar architecture and components fulfilling the desire of Aston’s boss Andy Palmer to achieve high efficiency in both the car models. The production version of this Lagonda concept car will be lined up against the Rolls-Royce Cullinan and Bentley Bentayga. However, Aston’s boss was found saying that both these models will not be competing against each other due to their different briefs.

Palmer, boss of Aston Martin, also stated that “This is a car for tech entrepreneurs, the guys who drive Teslas, not Bentleys and Rolls-Royces”. It is at the same high-net-worth market but not aimed at the same customer.”

The styling aspects including the windscreen and side glass on the All-Terrain concept car can be instantly recognized from the Vision concept. The sleek profile and futuristic styling of the All-terrain SUV are indeed eye-catching for the car lovers while it is running on the road. The design chief, Marek Reichman also said that “the design was challenging, but it certainly works”. Adding to this, he further stated that “the design of this Lagonda concept SUV has to be unearthly and different”.

Talking more about design, in an attempt to avoid the usual slab-sidedness that is generally found in large SUVs, and to keep the body sleek, the Lagonda concept car has been designed from the roof down, unlike the floor up design. However, the raised driving position and greater cabin space is also something eye-catching in the Lagonda SUV while moving from the sedan. Lagonda SUV is around 200mm taller than the earlier Vision sedan. 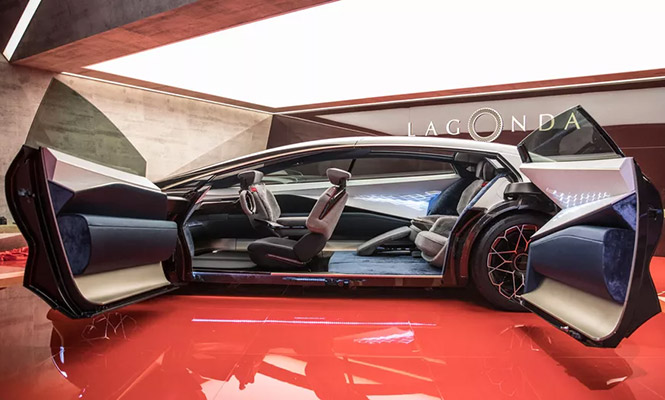 Discussing benefits of electric power and its packaging, Reichman from Aston stated that “No one has taken advantage of the fact that there is no internal combustion engine”. He further added, “There’s oodles of space in here.” Thus, Aston is cashing on the electric packaging capabilities to offer more space in its Lagonda concept SUV. Ultra-long wheelbase with batteries is also present in the Lagonda SUV concept car.

The curtains have not been lifted by Aston Martin when it comes to the technical specifics of the Lagonda All-terrain Concept car. However, it is rumoured that the production version of the electric SUV will give an all-electric range of around 644 km with a wireless rapid-charging technology that can fully charge the car batteries in approx 15 minutes.

The powertrains in the Lagonda Concept car would be two electric motors-one for each axle. Aston Martin is also expecting that the solid-state battery technology would be in readiness until production stage to meet that big range figure. The Lagonda SUV is not designed to a proper 4x4 off-roader, but instead, it will have the off-track potential as discussed by Palmer from Aston Martin.

To show distinction from the Lagonda Sedan concept, the interiors of the recently unveiled will be tweaked different with luxurious material, including cashmere and crystal, unlike the traditional material to create a different luxurious ambience. At the exterior side, SUV also made its presence in the market with the help of its rear-hinged rear door openings with the saloon.
The suspension system in both the concept cars are similar, or you can say imported from the upcoming DBX SUV from Aston Martin, which is rumoured to go under production early next year and is also the first luxury SUV from the house of Aston Martin.

Putting it to end, Palmer from Aston said that his company will make “seven models from three Meccano sets”. So, we are expecting a close relationship between Lagonda SUV, Lagonda saloon, front-engined DB11, Vantage, Vanquish, DBS Superleggera, the DBX, and any other mid-engined specials that Aston makes on top of its core range of seven models in the near future. That's all for now. We bid adieu to you and hope to come soon with more exciting auto blogs.

Aston Martin Plans To Electrify All range By 2025
Views: 936