At the 2018 Auto Expo, the flagship Dominar 400 motorcycle from the Bajaj stable, is showcased with a prototype TFT screen. Emphatically, it is not an official Bajaj component and is developed by Aurangabad-based Varroc Group. At the 2018 Auto Expo Components Show at Pragati Maidan, this TFT prototype screen that is likely to be in demand in its market-ready form was put on display, equipped with Dominar 400. Well, the Bajaj co-partner KTM offers kind of similar display with its most powerful Duke 390 model.

If convenience of this TFT in considered, it will provide the ride related information along with music and navigation while connected to the smartphone. Moreover, this prototype also conveys caller information with “Answer” or “Reject” choices handled through switchgear. This calling feature is similar to the KTM 390. Apparently, adorned with dual tone finish with brushed aluminium borders, the prototype TFT screen looks captivating. 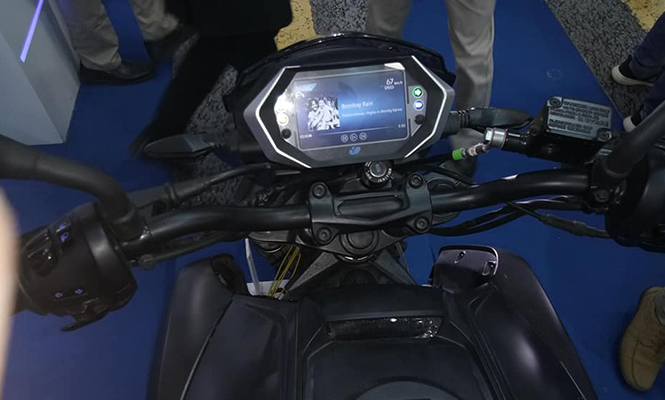 The set of images offered here is occupied by Bajaj Dominar Owners group on Facebook.

As the TFT display is pretty amazing with the mentioned features and you must be desiring to opt one for your beast. But on a sad note, it is in prototype stages and not going to hit the market anytime soon. Also, it is not clear yet that the Bajaj will use it as a standard equipment in the updated version of Dominar 400 or not. For more updates stay tuned with us.