The test mules of the Bajaj Urbanite scooter have been spied testing for the first time in Pune. Earlier than this, the design diagrams of the scooter emerged online which was hinting towards an early arrival of a scooter from the Bajaj brand. And, within three months of time, we have witnessed a heavily camouflaged prototype of the scooter.

However, the details of the scooter were not clear from the spy images albeit a closer inspection suggests the availability of a broader rear section along with vertically-placed LED taillamps and a grab rail. These are the identical features observed in the design drawing. Not even this, the rear view mirrors are also same in design with the surfaced sketches.

Read Also: Bajaj Chetak Scooter to Re-Launch in India in 2019

The overall design of the scooter presents it as a retro-styled product with styling almost identical to the Vespa models. Among others, it gets features like a round headlamp placed on the handlebar, apron studded turn indicators, stepped seat setup and alloy wheels, appeared on the design images. In addition to this, the scooter suspends over a single-sided telescopic fork and gets a stubby exhaust unit. 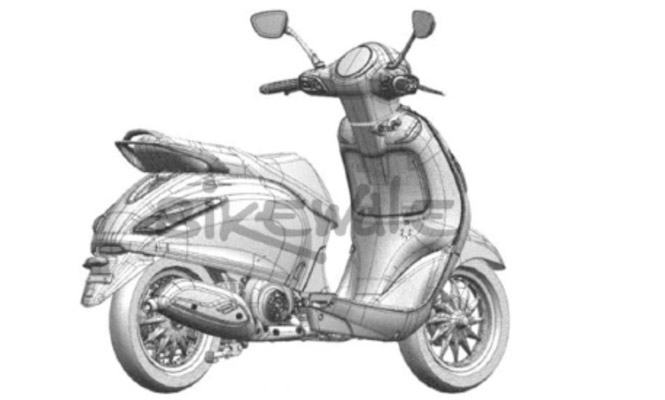 Besides this, there is no information about the fitments of the new scooter from Bajaj Urbanite moniker. However, it is expected to be powered by a powertrain compliant with the BS-VI emission norms. The engine displacement though is not known. Going by the design language, it turns out as a family scooter which will be embellished with almost all the modern features in trend as of now.