Benelli Imperiale 400, is a retro-styled cruiser which is questioned to hit the Indian market soon. Hyderabad based Mahavir Group that is Benelli's new partner will bring the motorcycle to India. Speculations suggest we could see its arrival by the early next year along with the price tag in between INR 2.5-3 lakhs. It will allow the bike to stand firm against its competitor in the sub 500cc segment.

The segment is led by Chennai based named cruiser bike maker, Royal Enfield and the Royal Enfield Classic 350 is its bestseller. The motorcycle based on a single downtube chassis and uses a 346 cc, 4-stroke, twinspark engine as a stressed member. The motorcycle that is renowned across the world for its comfortable riding position, uses 20.08PS at 5250 rpm and 28 Nm of torque at 4000 rpm from the mentioned powertrain via a mated five-speed gearbox. It gets a 280mm disc up front and a 230mm drum at the rear. Whereas, the bike weighs 192kg and offers a fuel capacity of 13.5 litres. 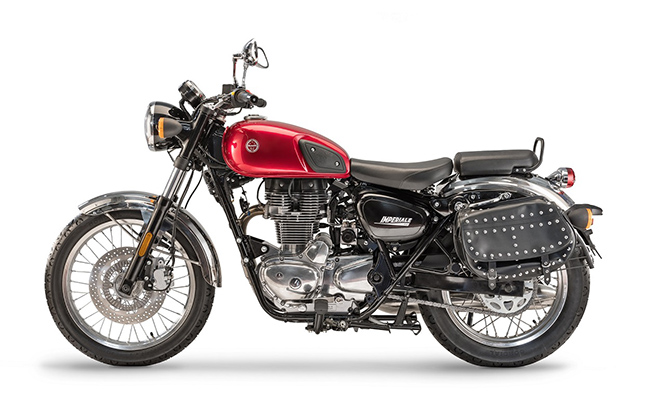 the Benelli is new here, though a host of new launches planned for 2018 and 2019 will help in the brand establishment. Other than this, the manufacturers like the Bajaj Auto and Harley Davidson are also planning to enter the genre which has a vast room and opportunities to expand in the coming future. It would be interesting to see that the upcoming products from the mentioned brand will be able to trespass into the Royal Enfield's territory.

Primarily showcased at the 2017 EICMA, Benelli Imperiale 400 was finished in attractive colour options of red and black. It based on a double cradle steel tube frame and get suspended by telescopic forks in the front and dual shock absorbers at the rear. For braking, front disc brake and dual-channel ABS at the rear, are as standard fitment. Benelli Imperiale 400 sits on 19” front and 18” rear wheels shod up with 110/90-19 and 130/80-18 tyres respectively. The upcoming has a 12-litre fuel tank capacity and weighs 200 kgs.

The instrument cluster is an all analogue unit containing speedometer, tachometer, odometer and fuel. Whereas, the head and tail lamp are halogen units. The Benelli Imperiale 400 gets a Euro IV compliant 373.3cc single cylinder, SOHC engine. In association with a five-speed gearbox, the mill is being said to produce 19 bhp of peak power at 5,500 rpm along with 28 Nm of torque at 3,500 rpm.

Royal Enfield Bullet 350 Trails: What Else One Can Buy in Similar Pricing?
Views: 2127