BMW HP4 Race that is a track-focused bike has been launched in India. The German manufacturer is asking for INR 85 Lakh (ex-showroom) for this limited edition model that will be produced in a limited count of 750 units globally. The foreign markets has already been availed with the availability of this non-road legal motorcycle last year.

The extensive use of carbon fibre made the bike first offering with carbon fibre mainframe. It is just 7.8 kgs but durable enough to bear tension to a greater level. Other than this, the wheels on which the bike runs are also made of carbon fibre instead of regular light alloy-forged wheel. The equipped wheels are approximately 30 per cent lighter than the comparative one. Overall, the HP4 Race weighs 171kg that is 37kg lesser than the standard motorcycle which ticks the weighing scale at 208kg.

Behind the fairing, the BMW HP4 is packed with a 999cc, in-line four-cylinder, race-spec engine. The engine with liquid cooling is said to generate the peak power of 215bhp at 13,900rpm along with the vertex torque of 120Nm at 10,000rpm. The motor comes mated to a six-speed racing transmission with straight-cut gears. 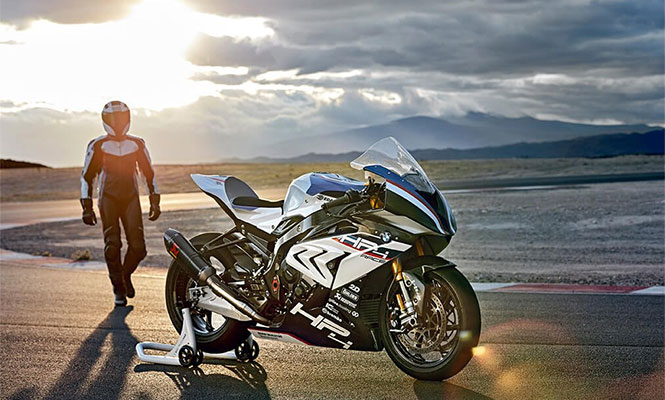 Among the gizmos, the non-road legal superbike gets Dynamic traction control, wheelie control, launch control, EBR which allows the rider to control the amount of engine braking, pit lane limiter, and anti-hopping clutch as well. Other than this, the carbon-fibre fairing, titanium Akrapovic exhaust and Aluminium WSBK swingarm are remaining major highlights of the BMW HP4 Race. Here in India, we can see the BMW HP4 Race that is available for sale only in a single colour option, fighting against the Ducati Superleggera that is priced at INR 1.12 crore. But let me remind you, as compared to HP4 Race, the Ducati Superleggera is a road legal bike.