The Datsun redi-GO, also known as Nissan Motor’s budget car, will be available for purchase from June 1, 2016. The car will go for sales from then onwards. As of now, it is available for booking. It will be available in five colours: Ruby Red, Red Lime, White, Silver and Bronze Grey. The prices will be kept in range from INR 2.5 Lakhs to INR 3.5 lakhs (ex-showroom prices).

The Datsun redi-GO’s exterior design is based on the company’s new YUKAN design language, which depicts similar styling of the concept model that was seen at the 2014 Auto expo two years back. It is Datsun’s first car that is based on the A version of the Renault-Nissan Alliance’s CMF (Common Modular Family) modular platform.

However, Datsun didn’t reveal much about the interior and exterior dimensions at the unveiling function but mentioned the ground clearance i.e 185 mm, claimed to be best-in-class. It is likely to offer generous knee room and visibility. The Datsun redi-GO is said to measure 3,430 mm in length, which turns to be around 249 mm lesser than the Renault Kwid (3,679 mm). 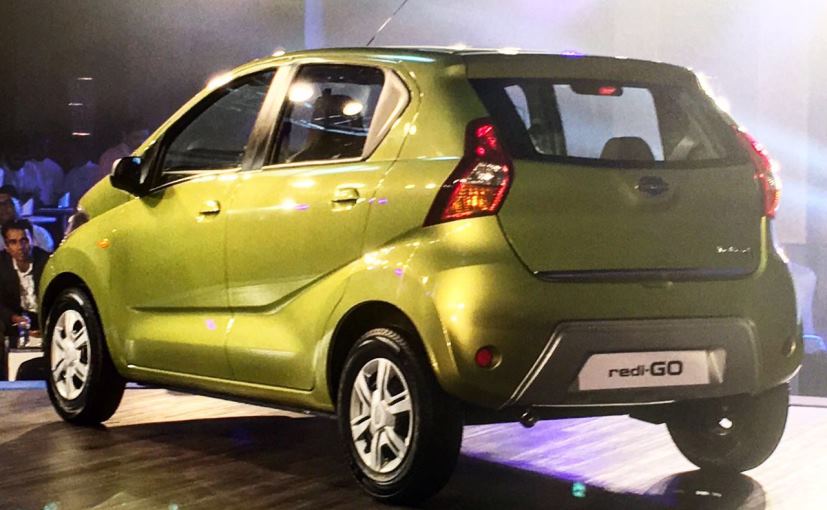 The redi-Go 799 cc all-aluminium, 3-cylinder engine produces a maximum power of 54 hp at 5,678 rpm and a torque of 72 Nm at 4,388 rpm. The company has also planned to launch the other powerful variants namely, Datsun redi-GO 1.0 and Datsun redi-GO AMT on a later stage.

Datsun Redi-GO Gets ABS As Standard Ahead of Safety Norms
Views: 1013

Datsun Redi Go To Go Under The Knife Soon
Views: 1129