Savji Dholakia is not an alien name in internet and diamond circles. The Diamond merchant from Surat is known for its yearly gifts to his employees which so far include 1,260 cars from Maruti and Datsun, 500 Fiat Puntos, and 1,200 units of Datsun redi-GO. Last year the employees had to do with reduced bonuses but the 1,200 happy Datsun redi-GO owner employees will have little to complain. The year 2018 marks the silver jubilee of Mr. Dholakia's owned and run ‘Hari Krishna Exports’. Hence, everybody was expecting something big from the man known for his showmanship and care for his employees.

On the occasion of 25th Anniversary of his diamond business, Mr. Dholakia has gifted premium top-spec Mercedes-Benz SUV to three of his employees. Each proud owner of the flagship Mercedes-Benz SUV has also reportedly completed 25 Yrs at Hari Krishna Exports and rightfully deserves the bonus. The SUV’s were gifted to the employees at a special ceremony in Surat. The SUV’s are a token of appreciation for the long-lasting association between the company and the employees. 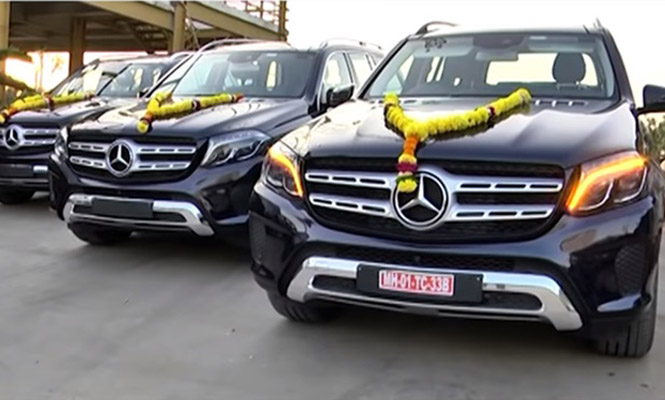 Reportedly, the SUVs on road price is Rs 1 Crore and it is the same model used by Bollywood Stars. While exterior highlights of the SUV and other like Mercedes-Benz E-Class and AMG C43. Mercedes company include LED headlamps with the Intelligent Light System (ILS), it is the NAPPA furnished cabin with a panoramic sunroof and3-zone climate control that offers luxury matched by few cars on Indian Roads. Power duties are performed by 3.0-liter V6 diesel engine churning maximum power of 258 Bhp and peak torque of 620 Nm. The engine comes mated to an automatic 7-speed transmission.

The Silver Jubilee Gifts will inspire other employees of Hari Krishna Exports to follow in the footsteps of these three stalwarts. All in all, Savji Dholakia time and again manages to grab headlines as well as inspire hunger in his employees.