The EcoSport is one of the most in demand compact SUV's out there thereby the renowned American auto major had earlier introduced a facelift version of the same that garnered tweaks over design as well as offered with a new powerful diesel engine option. Now, testing mule of the said unit has also been captured while making rounds in South America implying that an upgrade for the global market to arrive soon. Emerging reports hint that the automaker will take the covers off from the unit on November 14, this year. As the reports suggest, the India bound model will be brought in the second half of the next year.

The facelift version of the EcoSport compact SUV is anticipated to receive reprofiled hexagonal grille flanked by redesigned head-lights. Moreover, the front fascia of the unit is likely to be equipped with a revamped bumpers altogether with newly design alloy wheels. While side profile is slated to remain same as the regular one, rear end might house a new tail-lamps. Inside the cabin, it will host all-new steering wheel, a restyled centre console and a Sync infotainment system with a new color display. The dashboard, however,  is somewhat a copy of the standard model having minor changes. 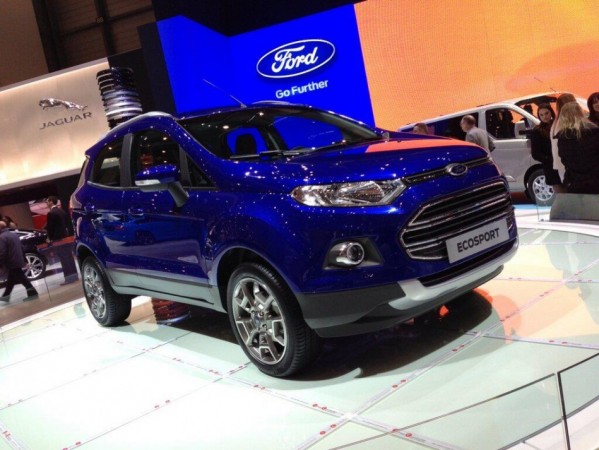 On the mechanical front, the Ford EcoSport is expected to be offered with the 1.2-litre petrol, 1.5-litre diesel and 1.0-litre turbocharged EcoBoost engine options here in the country. No such details have been revealed yet, but a more powerful 1.5-litre 'Dragon', three-cylinder, naturally aspirated petrol guise could be seen under the bonnet of facelifted EcoSport. Transmission duties will be handled by a 5-speed manual and an automatic box.

Ford introduced here in 2013, the Ford EcoSport had achieved a great success as there was very less competition for such segment. In recent years, the India auto market has witnessed sudden changes with the arrival of several big brands in this specific segment like Maruti Suzuki Vitara Brezza Mahindra TUV 300 among the others. The facelift is likely to provide a breath of fresh air to such unit and stand out from the crowd for these above-mentioned attachments.