Fuell, an electric two-wheeler manufacturer focused on building urban mobility solutions, is all set to reveal its first two products, including an e-bike and an electric motorcycle, on April 23, 2019. Fuell is an American two-wheeler brand founded by engineer Erik Buell with Frédéric Vasseur and Francois-Xavier Terny and launched recently. The company is reportedly in the final stage of building its first two products, which will be fully showcased in the next month.

The company’s head team consists of three people. Erik Buell is a famous name in the motorcycle racing industry. He had founded his own motorcycle company with the name Buell Motorcycle Company in 1983, which was fully acquired by Harley-Davidson in 2003. Frédéric Vasseur is the founder of Spark Racing Technology, a company engaged in building the Formula E powertrains. He is also the Alfa Romeo F1 Team principal. François-Xavier Terny works as the CEO of Vanguard Moto Inc., which is a high-end motorcycle company in the US. Buell has now officially entered the EV segment with his new brand, Fuell. The company is already planning to launch the first two products, which has been named the Flow - an electric motorcycle - and the Fluid - an e-cycle. 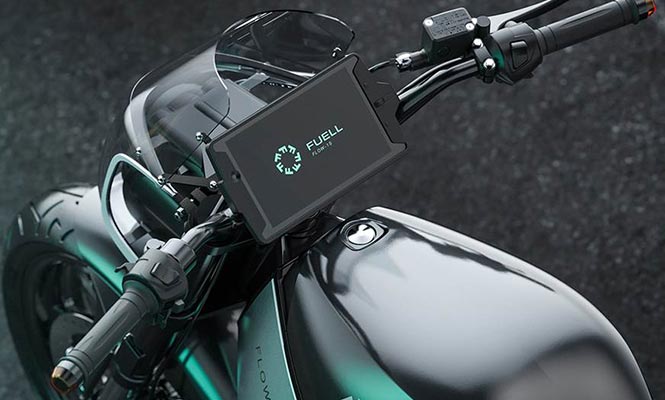 The Flow motorcycle will be reportedly launched in two variants - Flow-1 with an 11kW motor (150-200cc equivalent) and Flow-1S with a 35kW motor (350-400cc equivalent). The motor seems to be fitted with the rear wheel hub, which eliminated the need for a chain or a belt. The Fluid electric cycle may be released with a 250W motor Pedelec (max speed 32kph) or a 500W motor S-Pedelec (max speed 45kph). It will contain two removable electric batteries with a total power capacity of 980Wh and a claimed mileage of up to 125 miles (200km).

The company has also released the price details for its upcoming two-wheelers for the US market. While the Flow will be available at a starting price of $10,995 (Rs 7.69 lakh), the Fluid will be sold at $3,295 (Rs 2.3 lakh). The company will start selling the Fluid in 2019 only, while the official sales of the Flow will begin in 2021.