Indian two-wheeler industry that has one and only king, TVS Apache RTR 200 4V in the 200cc naked bike segment, is going to witness the emergence of a new member soon. The country’s largest selling motorcycle manufacturer, Hero MotoCorp is all set to roll out the Xtreme 200R in coming weeks. Going to be first premium commuter from the company, the Xtreme 200R is based on a newly developed chassis and will go in competition with the likes of Apache RTR 200 4V. It will really be interesting to see which folks will won the battle, the ones who seek for aggressive naked performance riding or ones consider fuel economy along.

Design wise, the upcoming Xtreme 200R features the similar design language of earlier Xtreme Sports bike. Though, the automaker not only invested its time but also resources to give the bike an evolved appearance. It gets an aggressive looking headlamp along with muscular fuel tank and sharp tank extensions. The elements such as the mirror, grab rail and tail lamp has also been reworked for a fresh appeal. The combination of raised handlebar and neutrally placed foot-pegs will offer a comfortable riding position.

The Apache RTR 200 4V, on the other hand is a beast and more combative in terms of looks. It has chiselled fuel tank with sharp tank extension that is complemented by clip-on handlebars, raised rear section with split seats and dual-outlet exhaust. The equipped instrument cluster is a fully digital unit with a host of additional features such as gear-position indicator, 0-60kmph recorder, lap time recorder, shift light and a top-speed recorder.

The Xtreme 200R gets the propelling power from a 200cc air-cooled carbureted single-cylinder engine as beating heart. It is the same powertrain was in use on the Achiever. The refined engine now expels out 18.1bhp with 17.1Nm and is dedicated to offer a better fuel economy. 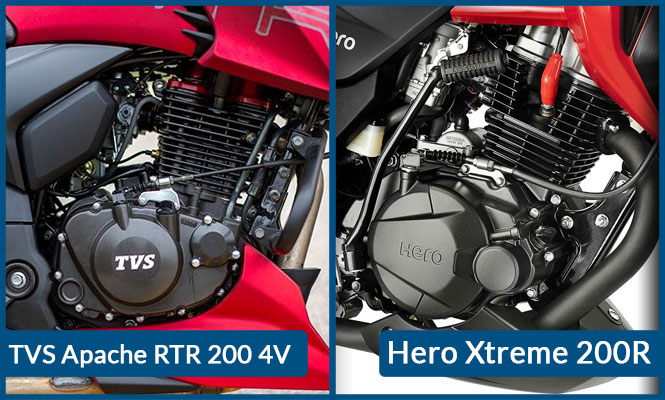 On the contrary, the much sportier Apache RTR 200 4V is capable of returning the peak power of 20.7bhp and 18.1Nm of torque via a 197cc single-cylinder engine. The engine with a four-valve head, an oil-cooler and an optional fuel-injection system is dedicated to offer you the thrilling performance with excellent throttle response. The power transmission is handled by a five-speed gearbox on both the bikes in comparison.

In terms of fitments, both the motorcycles are well-equipped offerings with prominent features. The suspension setup on both the bike comprises telescopic front forks and a rear monoshock. Though, the Xtreme 200R gets an adjustable monoshock unit. 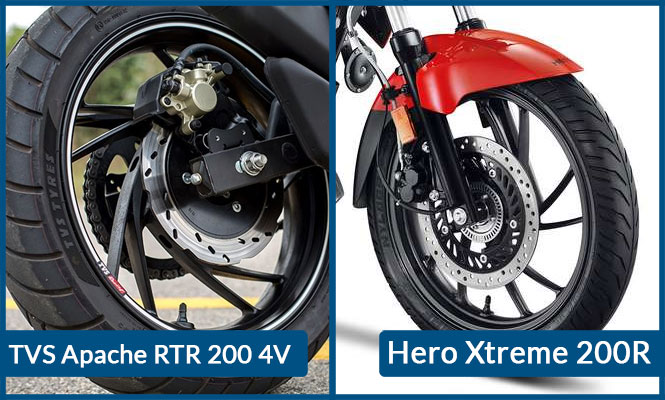 The pricing for the Hero Xtreme 200R is not revealed yet. Though, it is anticipated to attract the price tag below INR 1 lakh. However, the Apache that is on sale in a number of variants falls in the price range of INR 94,185 to INR 1.09 lakhs. The TVS Apache Carb variant is a standard model and most affordable in all. Whereas, the other top end F1 Race Edition 2.0 and the Carb variant with ABS costs INR 1.09 lakhs and INR 1.07 lakhs.

Who will win the battle, it can only be found post the launch of Hero Xtreme 200R that is likely in coming weeks. As both the bikes are well equipped, the positives of both bikes will decide the winner of the competition. The Xtreme 200R will be priced aggressively as expected and is capable of returning good fuel efficiency. While the Apache 200 is quick and a more attractive naked sports offering.