Honda CB300R which has already been listed on the brand’s official website, is now formally launched in India at price tag of INR 2.41 lakh. The image with the tagline “Bringing in another new era on Indian roads” was being teased earlier. The bookings for the same has already been started at a token amount of INR 5000 and the deliveries will open since from its launch. FYI, the motorcycle will not be available to purchase at Honda dealerships of 22 cities across the country. Albeit, at brand’s exclusive 22 Honda Wing World outlets.

As claimed the CB300R is tagged with an official price sticker around INR 2.41 lakh (ex-showroom). While the colour options which are being provided to opt your suite includes Matte Axis Gray Metallic and Candy Chromosphere Red. The Honda CB300R is packed with a 286cc, single-cylinder engine to propel via a mated six-speed gearbox. The powertrain is rated to develop the maximum power of 30.9 bhp at 8500 rpm and 27.5Nm of peak torque at 7500 rpm. 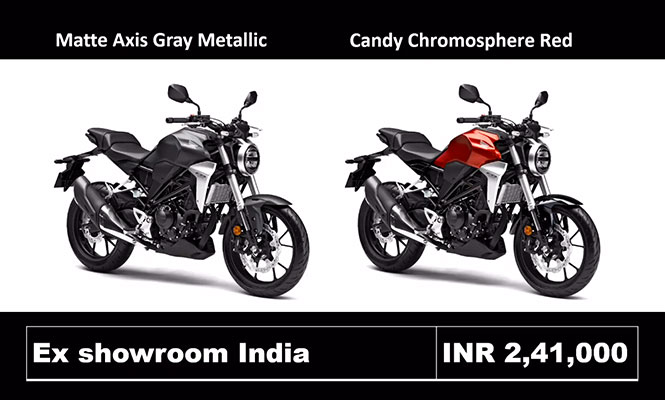 Inspired by the neo-retro styled Honda CB1000R, the Honda CB300R comes featured with LED lighting with two LED bars on its retro style round headlamp unit and all digital instrument cluster with readouts for engine rpm, speed, gear position and fuel gauge. This lightweight offering with 143 kgs carries a 10-litre capacity fuel tank. The claimed fuel efficiency for the naked runner stands at 30 kmpl.

The motorcycle has a seat height of 799 mm along with a ground clearance of 151mm. Rides on 17-inch wheels, the India-spec CB300R model will be shod up with MRF tyres instead of global specs’ Dunlop tyres. The tyres on the India-bound model will measure 10/70R17M/C 54H at the front and 150/60R17M/C 65H at the rear. The braking components on the new CB300R will comprise 296mm petal disc brake up front with 4 piston calipers and a 220mm disc with 2 piston caliper at rear wheel. The suspension setup, on the other hand, consists of 41mm USD up front with 5 step preload adjustability and 7 step adjustability at the rear monoshock.