Since India-bound Honda City Facelift model launched in Thailand, the excitement among the buyers here in the country reaches to the next level. The more rumours and reports about the arrival of this car in the country along with its expected features and styling details have been started emerging online. And now, ahead of its scheduled launch on February 14th this year, a leaked report, encompassing variant details and color options of the new City edition, out on the internet.

Instead of receiving a drastic change over the design, the 2017 Honda City is coming up with a mild makeover so that it can be more upmarket with its rivals. According to the source, the car will feature daytime running lights across all the variants, while LED headlights will be available on the VX & ZX trims. There is also mentioned about a larger grille with chrome garnish and a redesigned bumper at front. 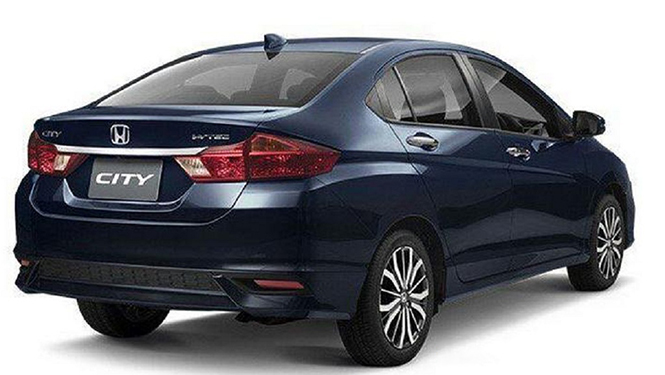 On the sides, the 2017 City will sport 15-inch alloy wheels on the V trim whereas the new 16-inch diamond cut alloy wheel will be offered to only the VX and ZX trims. The rear end could be redesigned with a restyled spoiler, a newly designed bumper with faux air dams and fresh LED taillamps.

If the reports are to be believed, the India-spec City will house a slew of goodies similar to the one seen with the Thailand-based model. It comprises a black dashboard integrated with all-new infotainment system supporting Apple CarPlay, Android Auto and voice recognition facility. Some of the other noticeable equipment are rain sensing wipers, electric sunroof, auto folding mirrors, leather seat upholsteries and auto-dimming interior mirror.

With respect to power, the City is unlikely to host any changes and will continue to be powered by a 1.5-litre i-VTEC petrol and 1.5-litre i-DTEC diesel engine options. For transmission, a 5-speed manual and CVT unit is there for petrol derivative, while the diesel has a 6-speed manual unit. On the pricing aspects, the facelifted Honda City is expecting near INR 8.5 lakh for the base variant.