Honda Forza 300 is one of the most advanced two-wheelers from the house of the Japanese automaker. Presently, this tourer centric automatic sports scooter is available to purchase in Japan and ASEAN countries. It is possible that this maxi-styled scooter could launch in India by Dec 2019, all the way through CBU route. Rising demands for the premium segment two-wheelers can be considered as a major aspect behind the expectation of its India launch. Also, the country’s second-largest two-wheeler manufacturer has rolled out products such as the Honda CBR300R and the CBR650R for the Indian audience, which fortifies the expectation of Honda Forza 300 India launch to a great extent.

As of now, Honda dominates scooter segment with its most selling scooter offering the Honda Activa. Priced around INR 60K, it is a budgeted family scooter which can easily make up the mind of any scooter buyers with its decent looks and advanced features. The introduction of the Forza 300 will help in expanding Honda’s customer base in the premium two-wheelers segment as well.

The Forza 300 is a maxi styled scooter with an aggressive aerodynamic design. It boasts of large LED headlamp setup and a massive front apron at the fascia. While the rear gets sharp tail lamp setup with integrated indicators. Other than this, the scooter gets a comfortable seat along with under-seat storage of two full-face helmets. Among others, the Forza 300 is blessed with attributes such as an electronically adjustable windscreen, a Smart Key System, a 12V charging socket, and a comprehensive instrument cluster with an LCD panel and two analogue dials for speedometer and tachometer. 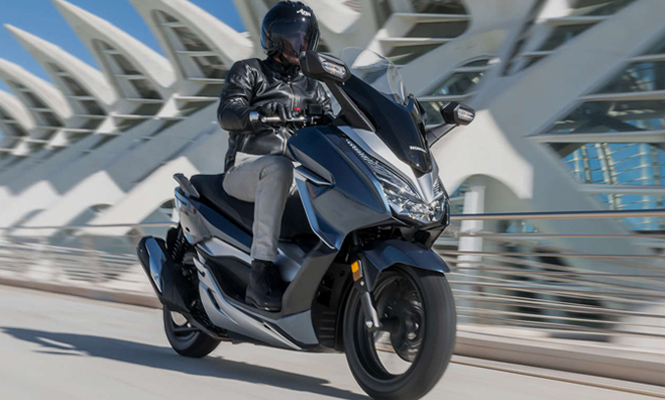 In terms of power, the Forza 300 is loaded with a 279 cc, 4 valves, SOHC, liquid-cooled, single-cylinder engine. It is capable of generating a peak power of 25PS and the maximum torque of 27.2Nm while the scooter is rated to return the fuel efficiency around 31kmpl. Runs on 15” front and 14” rear wheels, the scooter gets suspended over telescopic forks upfront and two springs at the rear. The wheels are shod up with 120/70 section front and 140/70 section rear tyres. The stopping duties on the scooter are under the consideration of 259mm disc brakes in the front and 240mm disc brakes at the rear. Whereas the rider aids of dual-channel ABS is being provided as standard equipment.

Here in India, the Honda Forza 300 could hit the dealerships via Completely Built Unit (CBU) route and expected to carry a price tag around INR 7 lakhs.