As the rumours owing to recently surfaced online reports, were hinting the silent elimination of Honda Navi, has been discarded by the sources close to the Honda Motorcycle and Scooter India. The reason behind was the zero production for March 2018. Justifying it, the sources explained slow down production on a temporary basis. However, the little bike is still available to purchase and you can register booking at any of the Honda dealerships.

The discovered real reason behind this pause in production is the introduction of model’s updated trim that as per the source close to the development revealed. It will be an evolved iteration as expected in aspects such as power, features and mileage. Furthermore, the new Navi will also witness changes at the design department that will be offered as inclusive of the bike’s ex-showroom price. There could be two new colour options to select. 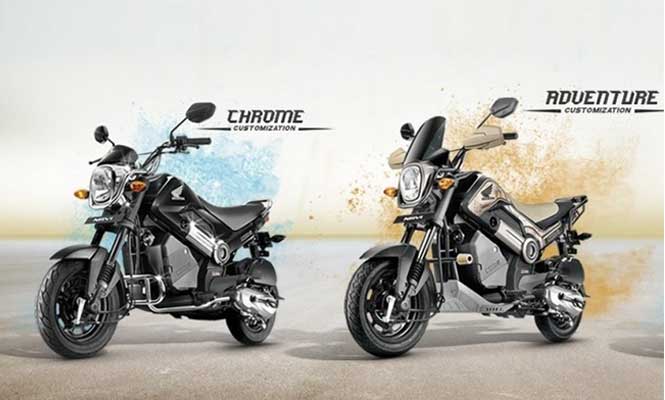 During its launch in 2016, the Honda Navi received whooping initial customer response and also been honoured with the NDTV Two Wheeler of the Year 2017 award. But the current sales figure for the model having aggressive pricing and quirky looks are not satisfying.

The product from Honda India is built on chassis shared from Activa along with its powertrain of displacement 109cc. Design wise, it draws inspiration from Honda Z series. Since its launch, the Navi barely observed any updation besides of being made compliant with the BS-IV emission norms. So, an improved iteration will definitely help in flagging prospects.

For the current financial year (FY 2018-19), the Honda India has projected plan of upgrading 18 of its models. Chances are the Monkey bike will also be a part of the same. In addition to this, this fiscal year could also see the arrival of an an-all new two-wheeler. However, the details regarding are not disclosed yet. Last year, the automaker rolled out the products like the Cliq scooter, Africa Twin, Grazia 125 and the X-Blade 160.

Some Positive News in the Coronavirus Pandemic
Views: 402

Indian Automobile Sector: Loss of Around ₹ 15,000 Crore due to Coronavirus Outbreak
Views: 892