It's been few days, when Nissan had officially unveiled its upcoming Kicks compact SUV in Rio de Janeiro, Brazil that showed off the exterior. For now, the interior of the car has also been disclosed via some pictures. As the Japanese automaker said, the car will celebrate its presence around 80 global markets. Although, It is expected that the car will first go on sale in Brazil by the second half of this year whereas the India bound model is likely to arrive sometime in next year.

Built on the streamlined theme along with dual tone arrangement, the C-SUV comes with an eye-catching interior. The cabin is furnished in an all-black theme and it is also adorned in a yellowish-brown color scheme as well as seats are decorated with the same color upholstery. In a bid to make it more impressive, the steering wheel flaunts a silver touch. Moreover, a seven -inch infotainment with color screen display and 360 degrees Around View Monitor with Moving Object Detection. 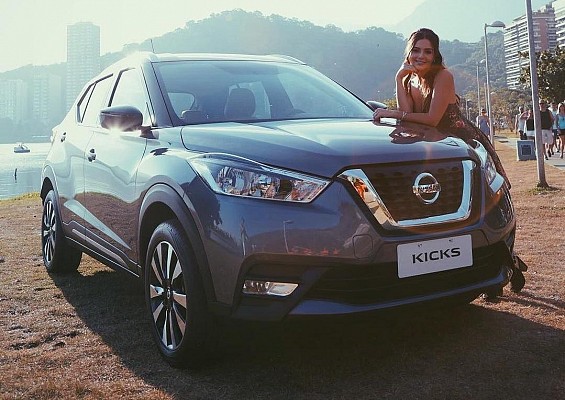 The concept version of the Nissan Kicks was first debuted at the 2014 Sao Paulo Auto Show. It is said to be based on the company's V-platform. It is reported that the car will run via a 1.6-litre flex-fuel engine, which comprises a mixture of petrol and ethanol. In addition, a 5-speed manual or an X-TRONIC transmission options could be mated with the engine. Well, all the other details are under the impression yet, it will come out soon.

Apart from the above mentioned information, the India-bound Nissan X-Trail hybrid is also set to arrive in the market. The testing has already been started, of which one was spotted earlier on the Chennai roads. With a powerful engine and many other technical and cosmetic specs, the car could regain its position in the Indian auto market. Imported via CBU (Completely Built Unit) route, it will be priced between INR 32 Lakhs to INR 35 Lakhs (Ex-Showroom).

New Joint Board Will Be Created By Renault, Nissan and Mitsubishi: Declares MoU
Views: 838

Not To Be Missed Discounts On Nissan Sunny and Micra
Views: 899