The dirt bike offering from the Japanese performance bike manufacturer, the KLX 140G has launched in its 2019 version in India. Here, it is priced at INR 4.06 lakhs (ex-showroom, Delhi) for which the bookings have also been opened.

In its 2019 Model Year guise, the motorcycle gets updated only at the cosmetic front although the engine specs and cycle parts are carried forward from the older version. the Kawasaki KLX 140G, an entry-level for beginners suspend over long travel suspension with the travel distance of 190mm on the front and 200mm on the rear monoshock. 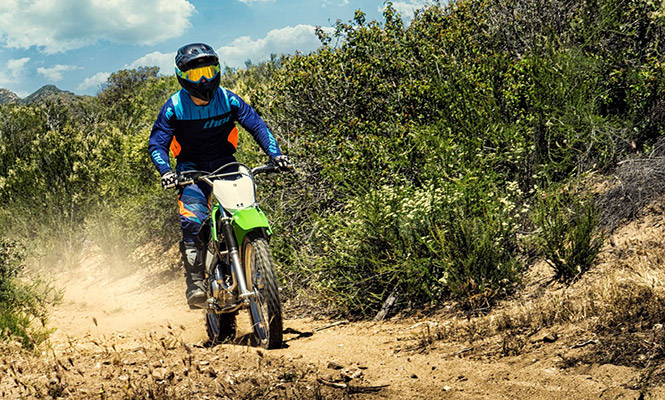 It is constructed over a semi-double cradle frame which mounts over 21-inch wheel at the front and 18-inch at the rear. The spoke wheels are wrapped up with rubber meant for off-roading. The easy-to-reach handlebars and flat seat offer a comfortable riding posture. The above-mentioned equipment provides a composition suitable for riding around the tricky dirt tracks.

Under the fuel tank, the 2019 Kawasaki KLX 140G is loaded with a 144cc, four-stroke, single-cylinder, air-cooled, SOHC motor. In association with a five-speed gearbox, the mill churns out a strong torque delivery for efficient dirt riding. However, the power output is not revealed officially yet. With a ground clearance of 315mm, the motorbike tips a minimal 99kg on the weighing scale.

FYI, the Kawasaki KLX 140G is not a street-legal motorcycle and shares platform at the dealership with the siblings such as the KLX 110 and KLX 450R. In its category, there is no competition and the model enjoys its monopoly in India.