Kawasaki receives the patent for its Ninja-styled electric bike which looks same as the Ninja 300 in terms of the style. The Ninja 300 bike is the entry-level sportsbike under the company brand. The company filed the patent long back i.e. in March 2013 and got the green signal and was published in March 2019.

If the patent image is to be believed, then it can be said that the Japanese bike manufacturer company has been working on the electric bike from a long time. The Kawasaki in March 2015 patented a sportsbike-styled electric motorcycle which was based on a trellis frame. The drawing did not unveil the complete design of the bike but disclosed the sharp tail section and clip-on handlebar. While the new patent indicates that the design of the electric motorcycle is same as of the Kawasaki Ninja 300 bike. The body panels like the windscreen, fairing and rear section, twin headlamp setup, cannot be spotted due to which it can be assumed that the same design will also be given to the production model. 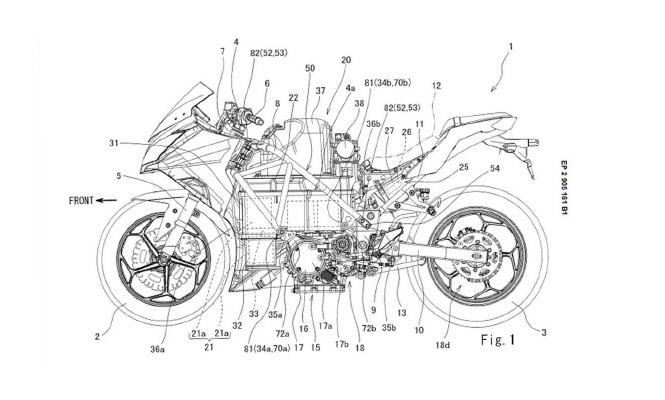 Apart from the design, the patent also gives details about the swappable battery mechanism which the company will fit in the future electric bikes. As per the details in the patent, it will get the support from the tubular frame which contains hinges on one side. This hinge allow it to open and provides the pair of batteries to access. Two batteries are the primary battery which will operate along with the secondary battery as a backup. The swappable design will change the discharged battery with the charged one. This bike will be furnished with the lithium-ion batteries.

It is still a mystery when the company will unveil its electric bike but the patent points out that Kawasaki is working very hard on this concept and will soon disclose it.