New Made in India Kawasaki Ninja 300 Launched at INR 2.98 lakh

Kawasaki India is looking in a beast mode as the bike maker is continue to update its existing product. Earlier this month, the company has launched the locally assembled model of its Ninja ZX10R that is priced comparatively lower than the CBU imported model. The similar treatment has also been opted for the 2018 Ninja 300 which is being offered at the INR 2.98 lakh. Packed with a host of locally sourced components, the 2018 Ninja 300 is INR 80,000 cheaper than the outgoing model. Currently on sale, the CBU brought up variant of the model is priced at INR Rs 3.63 lakh, ex-showroom. Mind you, the advanced safety of ABS misses out on this CBU variant. Whereas, this new India made variant comes armed with ABS as standard fitment.

Kawasaki says, “The new high-tensile steel frame adds to the chassis stability and the assist & slipper clutch, based on racing technology, acts as both a back-torque limiter and self-servo mechanism that enables a lighter clutch lever pull.” The Ninja 300 will also receive LED head and tail lamps and an updated instrument console.” 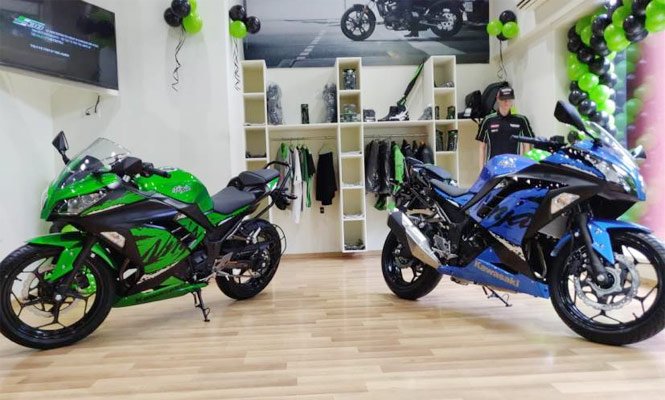 Beneath the fuel tank, the Kawasaki Ninja 300 draws propelling power from the 296cc, parallel twin, 4 stroke, fuel injected, liquid cooled engine. Comes mated to a six speed gearbox, the engine rolls out the peak power of 38.5 bhp power at 11,000 rpm and 27 Nm torque at 10,000 rpm. The 290mm and 220mm petal discs at the front and rear respectively take care of braking duties. In addition to this, the feature of slipper clutch and new colour options are being offered on this Made-in-India variant. The company is providing the first lot of bikes with 3 years unlimited kms warranty as an introductory offer. As the offer would not be applicable on bikes put later on sale.

At the launch event, Mr. Yutaka Yamashita, Managing Director of India Kawasaki Motors, said about the bike, “As per Kawasaki’s product portfolio Ninja 300 is entry level sports bike. We have observed that customers start with Ninja 300 and then upgrade to the next class. Therefore, Ninja 300 happens to be our bestselling product in India because of affordable price.”

On a happy note, the Kawasaki India dealers are offering a price cut of INR 41,000 on the Ninja 300 CBU available in stock. This move is taken by bike maker in order to clear the outstanding stock. Those who are willing to purchase CBU stock please do enquiry at the nearest dealerships as the Ninja 300 CBU units are still available on sale at mentioned discount.