Maruti WagonR Electric Likely to be An Expensive Car

Maruti is reportedly testing its new electric car which is based on WagonR and runs on the Heartect platform. According to reports, the WagonR EV might cost well above Rs 9 lakh, which is the cost of the top-spec Suzuki Dzire. The new small EV by Maruti is expected to be launched by the next year and will be offered with a subsidy under the FAME II scheme. It will compete against the likes of the Mahindra eKUV100 and Tata Tiago electric in the affordable EV segment.

The 2019 India Future Mobility Show was organized at the Bangalore International Exhibition Centre where a range of emerging mobility solutions was showcased. However, all the limelight has been stolen by two Maruti brand cars WagonR electric and the Solio Hybrid.

A total of 50 prototypes of WagonR are put in testing conditions by Maruti Suzuki across its different R&D centres in India. These prototypes do not have any camouflage and can be seen with ‘electric’ vehicle tag written in bold letters on the back of the car. This is also a marketing gimmick that has been employed by Maruti to promote its electric powered cars. Even the hybrid engine-based Solio has also been tested on Indian roads by Maruti without any camouflage. 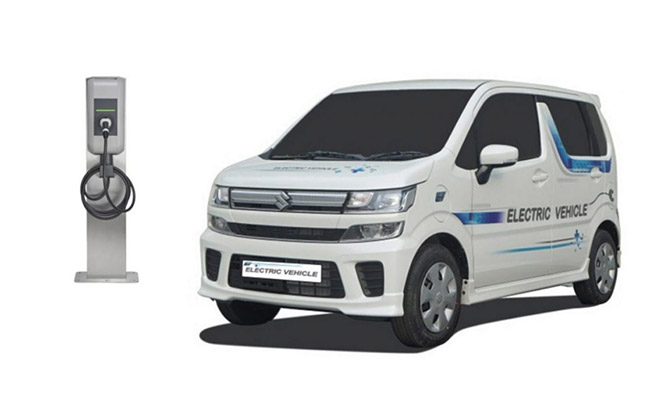 Talking about the design, it is expected that Maruti will build an electric variant of the recently launched 2019 Maruti WagonR in order to keep the prices in check. The electric version of WagonR might come up with the exterior features like the large two-part grille, large bumper, body-coloured B-pillars, rear-view mirrors, and embedded tail lamps. At the interior side, we can expect a table-shaped touchscreen infotainment system, horizontally placed wide AC vents. As far as safety is concerned, the car will come equipped with features like ABS, EBS and airbags for front seats.

As far as environmental safety is concerned, WagonR can become the preferred choice of the Indian customers. Although, it will cost double than its sibling petrol variant, which can be a setback for customers. The expected price tag for this electric car would be around INR 7 to 8 lakh. WagonR electric has been developed at the Suzuki headquarters in Japan. However, for the cost-cutting purpose, Maruti might look to localize the production of WagonR. For such purpose, a car battery plant is also expected to be set up by Maruti in India. Talking about Solio hybrid, it is very unlikely that Maruti will launch this electric car in India. However, rumours indicate that Solio might be used for manufacturing of larger MUV, most possibly a 7-seater variant of WagonR.

As far as the 2019 Future Mobility Show is concerned, it is an embankment by the Confederation of Indian Industry (CII) aiming to create sustainable future mobility in India by electrification of Indian automobile sector. A lot of government bodies have joined hands with CII to achieve this vision. These government organisations include the Ministry of Road Transport & Highways, Association for Promotion of Electric Vehicles (APEV) of Japan, Society of Automotive Engineers India (SAEINDIA) , Government of India and associations like Automotive Components Manufacturers Association of India (ACMA), Society of Indian Automobile Manufacturers (SIAM), Society of Manufacturers of Electric Vehicles (SMEV), and The Energy and Resources Institute (TERI).