Mercedes-Benz India has started its 2019 with its blockbuster launch, the V-class. The V-class has been launched on 24 January 2019 with the starting price of Mercedes-Benz V-class is Rs 68.4 lakhs and the top-spec variant costs Rs 81.9 lakhs . From Mercedes Vitoria plant which is in Spain, the V-class has been imported due to which the price sticker is less because the cost of production is less in Spain as compared to Germany.

The V-class MPV is the replacement of the Viano. The MPV has a roomy and practical interior with all the deluxe equipment. In foreign, the V-class is available in three lengths- compact (4,895 mm), long (5,140 mm) and extra long (5,370 mm) but India got the long which is exclusive and the extra long wheelbase which is Expression variants. The Exclusive offers six-seater and the Expression is a seven-seater. The two armchair-style seats make the six-seat V-class special is its middle row arrangement which sits on the flexible mounts and can be twirled around to face the third row. Both the variants can access the rear seats which are done through a sliding door. Both the trims also get four metallic colour options- blue, black, silver, and white. 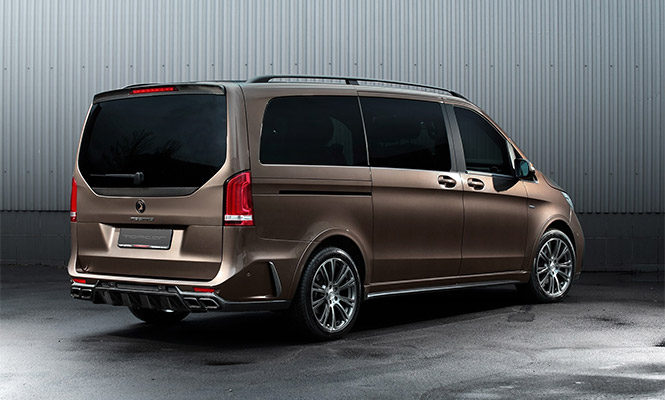 The Expression variant gets LED headlights and deluxe features such as dual-zone climate control and a multimedia system while the Exclusive variants have a longer features list like ambient lighting, adaptive dampers, and larger 17-inch alloy wheels (Expression gets 16-inches) and richer materials. For accessing the luggage area easily, there is an openable rear window. The V-class Exclusive also has Nappa leather upholstery and a folding and movable centre table at the back. The MPV also features an optional 640 W 15-speaker Burmester surround sound system. The V-class has safety kits including attention assist, a 360-degree camera, six airbags, and active parking assist.

In India, the V-class is only available with single powertrain option- a 2.1-litre diesel powertrain that churns out 163hp of maximum power and 380Nm of maximum torque coupled with a 7G-Tronic automatic gearbox. The powertrain of V-class is same as of older OM651 family of powertrains in spite of the latest OM654 range that powers most of the Mercedes models. The 2.1-litre powertrain gets an additional hardware that follows the norms of BS-VI emission standard.

The Mercedes v class will be benefitting from the government's homologation norms which would make it up to 2500 vehicle import per annum. In 2011, the R-class was launched and it had only a few buyers, so soon it was discontinued.