The latest version of ‘GranTurismo’ supercar has been offered by Italian luxury carmaker Maserati on 12th October 2018 at the cost of Rs 2.25 crore. The “sharknose” hexagonal grille design of the supercar has been inspired by the Alfieri Concept which includes three-dimensional effect to the frontal view. The Sport and the MC. are the two variants with naturally aspirated 4.7-litre V8 engine, hand-crafted by Ferrari in Maranello. While the car produces 460PS at 7,000rpm and 520 Nm peak torque at 4,750rpm, attached with six-speed ZF automatic gearbox directed to V8 powerhouse.

Bojan Jankulovski, head of operations, Maserati India said that "For over 70 years, our quest has been to develop and refine a unique, pure expression of the GranTurismo concept. What we are going to showcase tonight is the finest example of timeless philosophy. It’s a luxurious, handcrafted grand-tourer fitted with a sophisticated race car engine, one of the last naturally aspirated engines. The re-styled GranTurismo is a car for those who defy convention, those who dare to be different”. 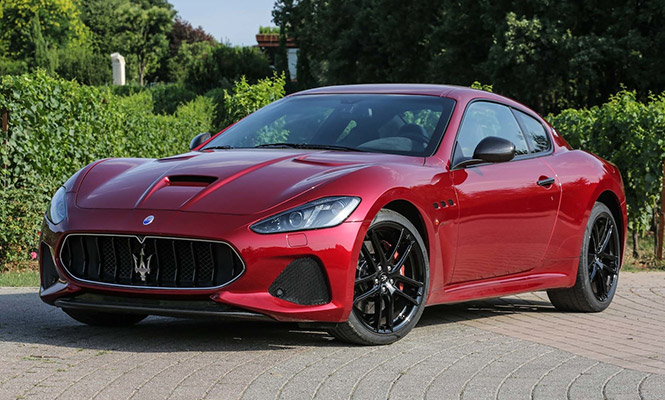 New, lower air ducts and the grille are coupled to tweak the airflow distribution and reduces aerodynamic drag from 0.33 to 0.32 in the GranTurismo. Modernization of rear bumper has been done with the significance on the natural grace of the iconic GT coupe and cabriolet which feature a neater design with two-fold layout for the Sport and MC versions. ‘Poltrona Frau’ leather seats including headrests is internal comfort given by 2018 GranTurismo.

Refined ergonomics and high resolution 8.4-inch capacitive touchscreen is present in the new cabin of GranTurismo. The infotainment system is integrated with Android Auto smartphone and Auto CarPlay mirroring functions. Double rotary dial made of forged aluminium and the repositioned button cluster for the car’s driving mode has been redesigned in lower console. On both Sport and MC versions of the new Maserati, Harman Kardon Premium sound system and double dial clock at the centre of the dashboard are standard.