According to a report published in the AutoHome, a renowned chinese publication, the next-generation 2017 Hyundai Verna is said to be offered with an wheelbase measuring 2,600 mm. The new Verna will hold a extended 30mm longer wheelbase than the current Fluidic Verna. 2017 Hyundai Verna will be based on a Fluidic Sculpture 2.0 design philosophy. It will sport a new exterior styling plus additional interior updates. However, the powermill is expected to be carried away, holding possibility of some major tuning in order to enhance the efficiency and performance.

Notedly, the 2600mm wheelbase is good for a mid-size sedan as the Honda City sedan also offers a wheelbase of 2600 mm. Slated to be launched by the next year, the fifth generation Hyundai Verna has been spied in South Korea under pre production prototype testing mule. Some exterior and interior counterpart were evident in the spyshots. The exterior gets a new headlight and tail lamp assembly followed by chrome slats on front grille. The bonnet design gets wider, a honeycomb mesh, new ORVMs with LED turn indicators along with newly designed alloy wheels.

Hyundai also displayed the 2017 Verna concept model at Auto China 2016. Sporting an all-new design, it is reported to be launched in the Korean market by the end of this year. Its India launch is expected by 2017.

As per the report, Hyundai shall assemble two engine options namely, 1.4- and 1.6-liter engines in the 2017 Verna. For the Indian market, it is likely to gets another 1.6-liter petrol unit. The engines shall be paired to a 6-speed manual, automatic and a 7-speed DCT transmissions according to the respective variants. 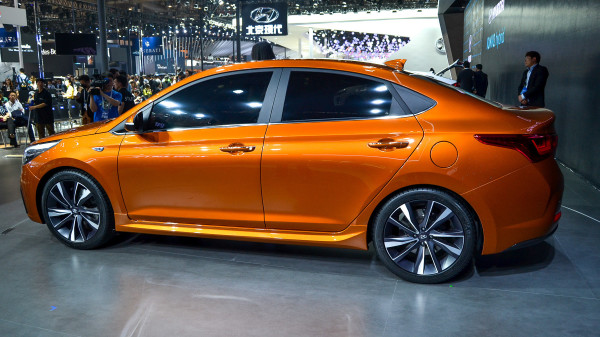 2017 Hyundai Verna will also hold a sunroof along with taller rear end plus roof mounted antenna. The cabin could receive major updates along with metallic gold finish. It will feature upmarket dashboard design, a touchscreen infotainment system and generous legroom at the rear.

It is likely to arrive in India by the end of 2017. It is expected to be priced in between INR 7 Lakh to 12 lakhs. Moreover, the 2017 Hyundai Verna will get 90% localization in order to keep the price competitive. Post launch, it will be seen competing with mid-size sedans such as the Maruti Ciaz, Honda City, VW Vento, Nissan Sunny and Skoda Rapid.

Also Read: Hyundai Brings in Standard Safety Upgrades with the Eon, Grand i10 and Xcent

Hyundai Santro Anniversary Edition All Set to Launch Soon Ahead of Diwali
Views: 4447