Porsche launched the eighth-gen iteration of the 911 iconic sports car in 2018. Now, the company is ready to turn its step towards India and is going to launch the new 992 series 911 in the country on 11th April. India is expected to get the Carrera S and the Carrera 4S variants in coupe and cabriolet body styles. The price tag for the standard model of the car is speculated to be around Rs 1.5 crore (ex-showroom). The first batch images of the new Porsche 911 has been leaked.

If compared to the predecessor, the new Porsche 911 is larger and more powerful. The design statement and Silhouette of the iconic Porsche are carried forward to the new-gen 911 and features the wide rear-wheel arches, swooping roofline, and bulging front mudguards.

Powertrain of the 992 Series Porsche 911 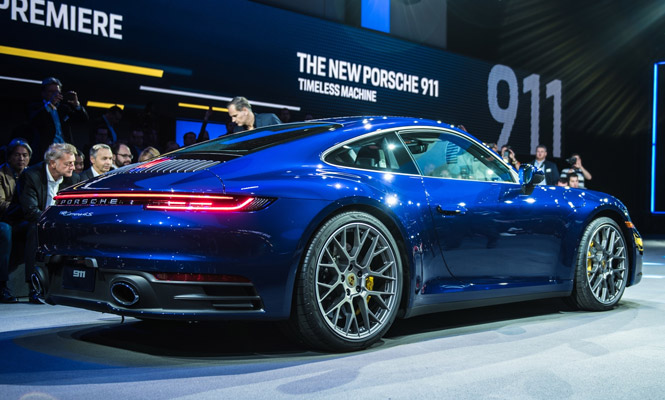 In terms of the looks, the new 911 looks almost same as the previous one and also the entire shape of the car remains almost unchanged. The latest car gets updated from the back end which comes now with a new tail-lamps that are interlinked with each other same like seen on the new Cayenne, Panamera, and Macan. As compared to the wide-bodied (Turbo/GT2/GT3) variants of the former-gen model, the new car is wider. The 922 series Porsche 911 comes with an electronic back spoiler that can be lifted or lowered through a centre console or can be automatically triggered at certain speeds. The car is expected to come with a 20- or 21-inch wheels in India.

The cabin of the new 911 features a new design statement overall which can be seen in the other model of the Porsche in the same range. The 992 series 911 car gets the typical centrally mounted analogue tachometer in the instrument cluster. While all the dials are positioned on the instrument cluster and are digital and can also be customised according to the user. The new Sports car also comes with a 10.9-inch touchscreen infotainment system and with a set of touch-based controls for other functions.

The new Porsche 911 will compete with the rivals- the Mercedes-AMG GT series, Audi R8, and the Jaguar F-Type and Maserati GranTurismo.

Audi, Lamborghini, Porsche, Skoda, VW To Merge In One Entity Under One Leadership
Views: 1772