Ahead of its expected debut in early next year, an engineering mule of the all-new Chevrolet Beat hatchback has been surfaced online wearing no camo over the body. From the spy shots, looks like, the car is being in its final rounds of testing and could be launched any soon here in the country. Visually, the production ready model is revealing that the 2017 version of the car carries quite a similar design cues once seen on the Beat Active Concept at the 2016 Auto Expo.

Going by the fresh images, the front of the car is highlighted by the dual port radiator grille which has become the company’s signature mark over the past few years. Moreover, its upper or smaller portion of the front radiator also gets a single slat grille, which sports the company’s badge at the centre, while the lower section integrated with the air dam and vehicle number plate. 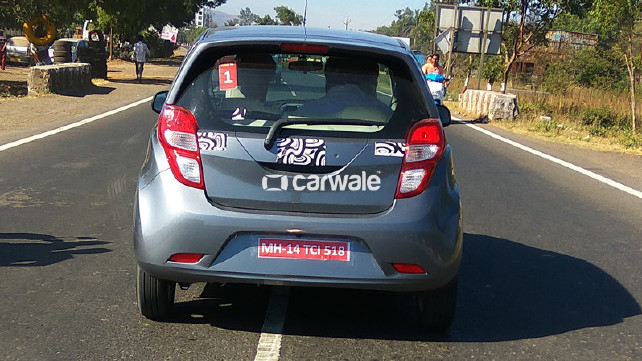 Moving to the side profile, the new Beat retains the C-pillar-mounted door handles that will also get to see with the upcoming Maruti Suzuki Swift, scheduled for launch in 2017. At the back, we can see redesigned tail lamps and a completely revamped bumper come equipped with the license plate. The ongoing Beat has the registration plate on the tailgate. On the inside, the model would get a 7-inch infotainment display system and a dual tone interiors while the instrument cluster is likely to be retained same as the outgoing model.

Powering the upcoming Chevrolet Beat 2017 is expected to be the same set of petrol and diesel engine options. The petrol derivative makes use of a 1.2-litre, four-cylinder trim that is capable enough of churning out 76 Bhp of maximum power with 106 Nm of torque. The oil bumper, on the other hand, comes with a 1.0-litre diesel engine tuned to fire out 57 BHP of power and 142 Nm of maximum torque. Both the engines will come fitted with a five-speed manual transmission.

Here's the Deal!!! Get a Chevrolet Beat Free on the Purchase of Cruze
Views: 2202