New safety norms which mandates ABS or CBS on the bike above or below 125cc has been implemented in the country from April 1, 2019. Bike Makers across the country were engaged to update their products with these advanced safety features over the last few months. In the queue, Royal Enfield too has updated all its popular models with the rear disc and dual channel ABS.

However, the Bullet 350 which is brand’s most affordable model is honoured with a slightly different yet a cheaper approach which consists of disc brake with ABS at the front wheel while a drum brake with an ABS ring over it. In fact, it is not the dual channel ABS setup. The rear ring on drum brake is for RLP (rear lift protection), and not ABS. Comprehensively, it’s not a dual channel ABS unit, instead of its a single channel ABS with front disc setup. 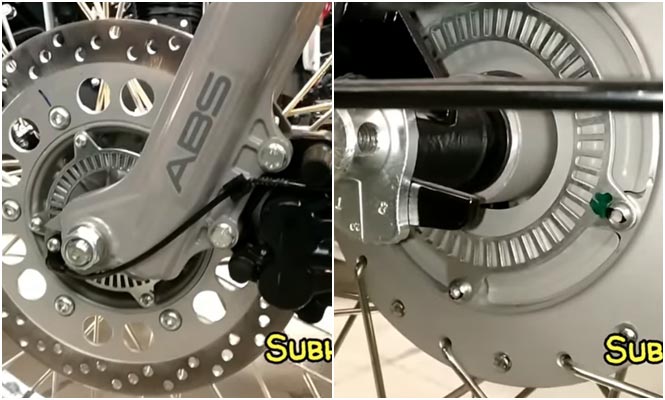 The top self equipment rear disc and dual ABS were introduced in Bullet 350 and 350 ES models back in December 2018. But now these models are being offered with rear drum brake setup instead of rear disc setup. 2019 Royal Enfield Bullet 350 gets power from a a 346cc, single-cylinder air-cooled, Twinspark engine. Mated to a constant mesh five speed gearbox, the mill is rated to make out 19.8 bhp of max power at 5,250 rpm and 28 Nm of peak torque at 4,000 rpm.

Other than this, the Royal Enfield Bullet 500 has also launched with ABS, a few week ago. Its ABS variant priced INR 14,000 dearer over the outgoing model. However, such treatment that is appeared with the Bullet 350 in terms of braking setup is not expected with the Bullet 500.

The Royal Enfield 650 twins, Interceptor and Continental GT are being offered with the dual channel ABS since first of their launch. Not even this, there are several other RE models which are also available on sale with dual disc and dual ABS. ABS is the feature which enhances braking performance and conveys confidence while braking in panic situation.

Other than the addition of ABS, the brand is working of the next generation of its available range of motorcycles. The Classic, Bullet and Thunderbird range will be availed with the underpinning of new chassis, new BS6 engine, etc. the models such as Classic and Thunderbird 2020 has already been spied on test in Chennai.

Royal Enfield Bullet 350 Trails: What Else One Can Buy in Similar Pricing?
Views: 2344

Royal Enfield 650 Issues Attested By The Owner Who Ridden Bike For 2 Months
Views: 1495