Royal Enfield Classic 500 Pegasus Edition Vs Bajaj Dominar 400: Which One Should You Buy?

Royal Enfield Classic 500 Pegasus is a special edition model from the Chennai based manufacturer. The motorcycle is developed to pay homage to one of the Royal Enfield’s motorcycles used in World War II. it was a two-stroke RE/WD 125 that was also popular with the name of the Flying Flea. The company will roll out only a limited count of 1000 motorcycles for the global market. Out of which 250 units will be provided for the Indian market. Here we are going to compare, the newly launched Royal Enfield offering with its fierce rival Bajaj Dominar 400. Bajaj’s flagship is trying its best to bite in Royal Enfield’s market share. On the basis of a few write down prospects, let’s find out, who will win the battle?

Being offered in two colours internationally, the Service Brown and Olive Drab Green, the Royal Enfield Classic Pegasus 500, is based on the existing Royal Enfield Classic 500. Besides getting period look from the equipped accessories such as canvas panniers, serial number written on fuel tank with RE and Pegasus logo, brown handle grips, leather straps with a brass buckle across the air filter, is all similar RE Classic 500 designing. The colour option that will be on sale in the country is the Service Brown Shade. 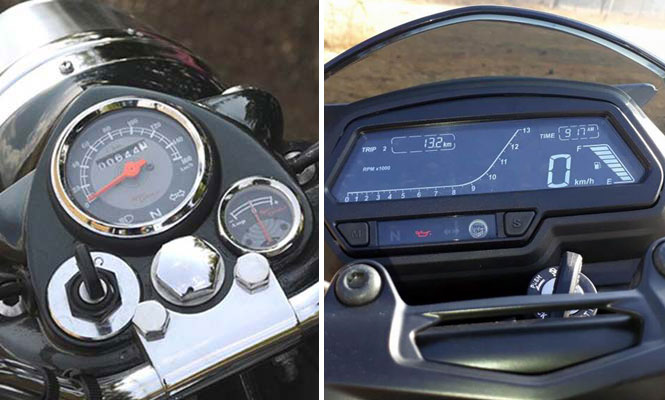 Read also: Bajaj Dominar vs Royal Enfield: Check Out Who is Powerful in Tug of War?

On the other hand, Bajaj Dominar is a unique motorcycle not only in terms of look but also in the riding position. It is meant for hyper riding with excellent performance, and riding comfort that is being said, RE conveys best in the segment. The bike features muscular stance as like the “Lion” across the body from the headlight to its tail lamp. The offered seating is low slung and offers comfortable yet confident rides. Apparently, the bike seems heavier though it is comfortable for all sorts of rider.

Royal Enfield Classic 500 Pegasus that belongs to World War II era comes equipped with a host of accessories and equipment. It gets authentic military markings, matching brown handle grips, leather strap with a brass buckle across the air filter, unique canvas panniers, blacked out silencers, rims, kickstart lever, pedals and headlight bezel. Furthermore, the instrument console on the Pegasus 500 is all similar to the ongoing standard model.

The Royal Enfield Pegasus Edition employs the similar 499 cc, air-cooled, single-cylinder engine from the RE Classic 500. In conjunction with a five-speed gearbox, the powertrain churns out 27.2 bhp of power at 5,250 rpm and 41.3 Nm of peak torque at 4,000 rpm. 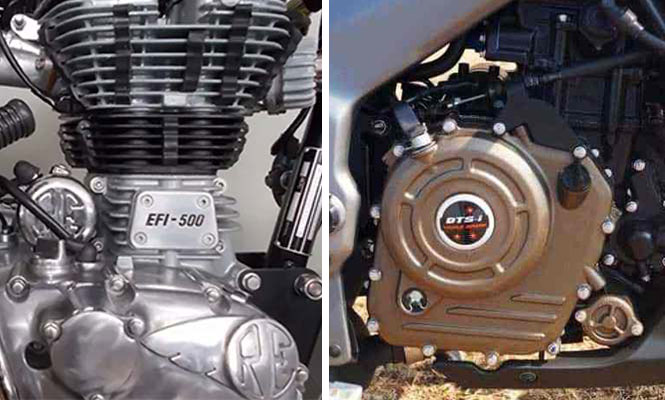 The Bajaj Dominar 400 is loaded with the largest capacity engine ever produced by the company. The 373cc liquid cooled single cylinder Dts-I engine with four (4) Valve setup and Triple Spark Plugs spawn out 35 PS of power at 8000 Rpm and 35 Nm of Torque at 6500 Rpm via a mated 6-speed gearbox.

The Royal Enfield Pegasus 500 edition that is put on sale only in the single colour option of Service Brown, will make you shell out INR 2.40 lakh (ex-showroom, Delhi). At this pricing, the bike maker is offering a range of free accessories such as a helmet, Pegasus inspired T-shirt, and the special Canvas Panniers.

Available in three colour options of Twilight Plum, Midnight Blue and Moon White, the Bajaj Dominar 400 is priced at INR 1.36 lacs for the base variant whereas the ABS variant of the same will set you back at INR 1.5 lac (Both prices Ex-Showroom, Delhi).

Concerning all the points included in the comparison, the Dominar 400 is powerful, stylish and quick in terms of performance and even priced more aggressive comparatively. But, if you’re a hardcore Royal Enfield fan, you would rather not look anywhere else and go with this special Pegasus 500 edition that is inspired from a two-stroke RE/WD 125 motorcycle was being used by the military during World War II.

2019 Bajaj Dominar Out for Delivery in Black and Green Combo
Views: 2137