Tata Motors has amazed its customers so far and we expect from the manufacturer to follow the same in 2018 as well. The company is also putting efforts to produce EVs for the Energy Efficiency Services Limited (EESL) and the state-run agency. In addition, the manufacturer also declared that it is going to showcase Impact Design 2.0 at the Auto Expo 2018. Therefore, the expectations are high for Tata Motors to launch a range of cars at Hall No.14 at the upcoming Auto Expo 2018.

It is electric vehicle expected to launch as part of #SmartMobility pavilion program. The car was firstly debuted as a concept in the UK(Millbrook village). Tata Tiago Electric is powered by an 85kW electric engine which produces 200 Nm of torque and able to reach 100km per hour from the rest in just 11 seconds.

Tata Motors already provided 250 units of the Tigor Electric cars to state-level EESL(Energy Efficiency Services Limited (EESL). Therefore, we expect this first mass-market EV to showcase at Auto Expo 2018 in order to aware public and media about its capabilities. As per the information, the engine of the EV is able to churn out a maximum power of 40PS. The further information is expected to reveal at Auto Expo 2018, although the car will launch later this year.

The Tata SUV has been spotted many times while testing in India. It is expected that Tata can showcase its new SUV at the Auto Expo 2018. The Tata Q501 can be based on the Land Rover Freelander 2 platform and expected to put above the Hexa. The car may offer two options in seating arrangement including the five and seven seats. The car is expected to own the Fiat-sourced 2.0-litre Multijet diesel engine and competes against the Honda CR-V, Jeep Compass, and Hyundai Tucson. 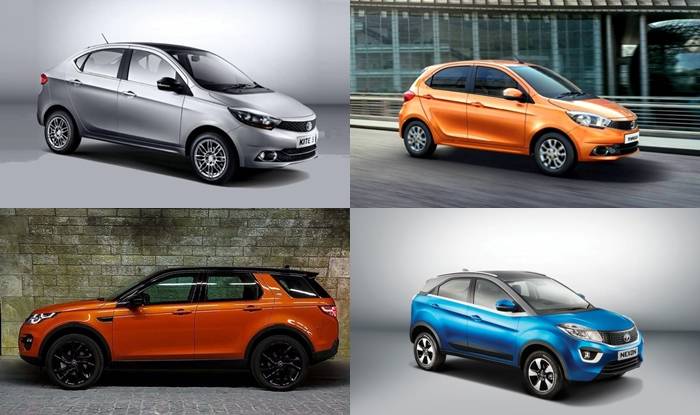 The new hatchback named Tata X451 is expected to launch at Auto Expo 2018. The new hatchback will be based on Tata’s Advanced Modular Platform (AMP) and should take the Impact 2.0 design language. The car will compete against the Hyundai Elite i20 and the Maruti Suzuki Baleno in the market.

The Tata Hexa was launched a year back and now it can come up with an automatic 4x4 variant. With the addition of a 4X4 AT variant to this SUV will obviously add extra weight to this but also make it compatible with many customers.

As we are expecting from long time for Tata Tiago Sport to be equipped with the 1.2-litre, 3-cylinder turbocharged petrol engine, this can be possible with the launch of this hatchback. With the compact dimensions inclusions, expect a car to provide extremely desirable performance. The engine of the hatchback comes mated to a 6-speed gearbox and able to churn out a maximum power of 110PS and a peak torque of 170Nm.

Tata Nexon AMT has a stylish and powerful diesel engine to make a good option for the sub-4 metre SUV segment. From its launch, the car has created a good number of sales and made way in Tata’s portfolio. In order to make it well-known among car buyers, the car is expected to come with an automated manual transmission (AMT) in the starting quarter of the year. Tata is expected to come with the diesel and petrol engines with AMT to provide customers an option to the Ford EcoSport AT. This stylish car is expected to showcase at the Auto Expo 2018.

Tata Motors to Stop the Production of Nano
Views: 1395