Recently, the powerful version of Tata Safari Storme was spied and now the automaker has launched it today for the Indian car market at the starting price of INR 13.52 Lacs (ex-showroom, Delhi). The newly introduced SUV has been named as Varicor 400, which was already disclosed through the spied images that surfaced on internet a few days ago. Not much has been changed in terms of cosmetics, while the powertrain has been tweaked in order to increase the power output. However, only the top end model has received a modified engine, whereas other trims offer the same mechanical specs. 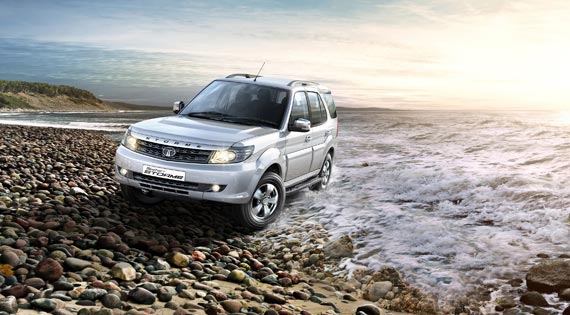 You may also like: Tata Safari Storme Varicor 400 Spied

Lookwise, the Varicor looks much similar to the current Storme, but many fitments have been added inside so as to cater to the customer needs. For comfort, it receives a wide array of equipments like audio system accompanied by Bluetooth and USB connectivity, steering mounted audio controls, rear seat centre armrest, electrically operated wing mirrors, and a height adjustable driving seat. Moving on to the safety front, it is available with ABS, EBD, dual front airbags, rear parking sensors and central locking system.

Discussing the powertrain, Varicor 400 continues to be powered by a 2.2 litre engine but with an increased power of around 154.8Bhp and 400Nm of peak torque unlike the earlier output of 148Bhp. This power is transmitted to wheels via a 6-speed manual gearbox that in turn is linked to an AWD setup. The vehicle can accelerate upto 60km/h in 5.2 seconds and upto 100km/h in around 12.8 seconds.

Tata Motors to Stop the Production of Nano
Views: 838