Toyota is all set to introduce in India the advanced version for its Toyota Fortuner franchise named TRD Celebratory Edition. Flaunting features such as 2.8 ltr diesel engine and six-speed automatic transmission in 4x2 configuration, this brand new car in India is locked at Rs. 33.85 Lakhs. The variant launched on the occasion of Fortuner’s 10th anniversary in India is only Rs. 2.5 Lakhs more expensive than standard Fortuner 2.8D 4X2 AT.

TRD Celebratory Edition - How it Looks

In terms of styling, TRD Celebratory Edition is an impression of Fortuner’s 2017 model TRD Sportivo but has some new elements which make it different from the previous model. Talking about the appearance, the model comes in pearl white color with a dual-tone back roof. The car’s front shows a TRD badge on the grille and a new bumper with a faux skid plate. Unlike previous editions, this time you get to notice the all-black 18-inch alloy wheels which are not available in standard 2WD AT Fortuner. The back of the car remains comparatively unchanged except for the new bumper design.

TRD Celebratory interior includes the maroon and black seats with TRD logo watermarked and in contrast to the seat is the dashboard with red-colored stitching. The dual tone theme can be seen in the inside walls as well. Apart from this no obvious changes could be seen in the features. Fortuner still carries the tradition of LED projector headlamps, 7-inch touchscreen with navigation embedded, 7 airbags, vehicle control with brake assist, hill assist control and ABS with EBD. 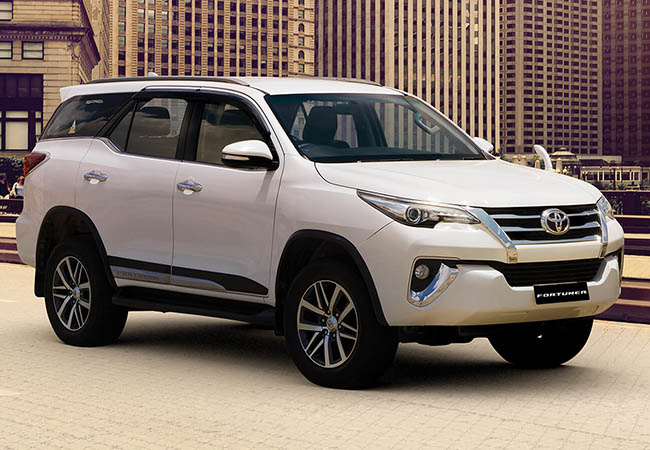 No modifications could be noticed in the mechanism as the model just like the standard Fortuner is powered by 177hp, 2.8-litre diesel engine. Possible competitors in the market against Fortuner’s TRD Celebratory Edition could be Ford Endeavour, Isuzu MU-X, and Alturas G4.

New Toyota Fortuner to be Launched in India on November 7
Views: 4499