American motorcycle manufacturer, UM Motorcycles that marked its official entry to the Indian biking segment in 2016, is retailing its Renegade range of cruiser motorcycles in the country. On sale, Renegade series consists of models such as Commando, Sports S, Commando Classic and Commando Mojave. Now as per a surfaced report from BikeWale, it has been found that the brand is planning to introduce an electric motorcycle in the country later this year. Though, this electric cruiser that will be known as the Renegade Electric, has already been showcased at the 2017 EICMA show.

On an important note, the first lot of this new Renegade cruiser in electric version will be provided for the capital city of India as the charging infrastructure as compared to other cities is much better there. Though, later in time, the other cities will also get the availability of this going to be first electric cruiser bike in India.

Based on an all-new platform, the electric Renegade will get power from a 30 kW motor that is likely to develop power around 25bhp. While the travel distance for the battery in a single charge is being mentioned around 150km. Also, with the fast charging option, it can be charged up to 80 percent just in 40 minutes. The gearbox setup to supply generated power to the rear wheel will be a 5-speed gearbox unit instead of the 6-speed one being used on the petrol-powered Renegade range of motorcycles. 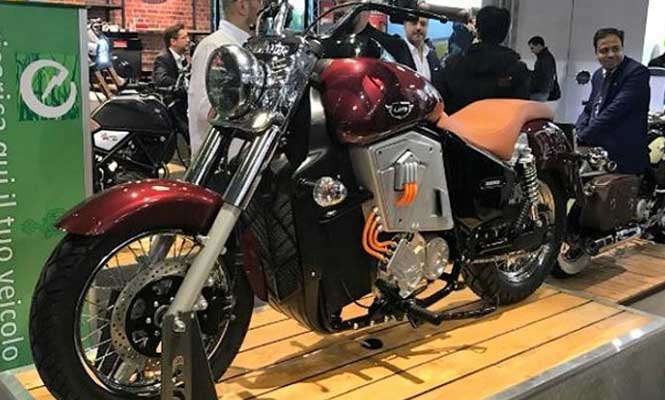 Expected to be showcased at the 2018 Auto Expo, the UM Renegade Electric will be a costlier deal with the price tag in the range of INR 6-7 lakhs. Though, its introduction in India will bring a revolution in the EV industry as it will be the first electric cruiser motorcycle.

Other than this, there are other two-wheeler manufacturers that are offering their electric vehicles are Hero Electric and Okinawa. These brands retail only in the scooter segment. No automaker provides electric motorcycles, well there are few startups like Torq Motorcycles and Emflux Motors those are looking forward to bring in their bikes in coming future. Expectations are we could see their products too at the imminent Auto Expo.

Recent reports suggest that prominent Indian brands such as Hero MotoCorp, Bajaj Auto and TVS are also in the queue to roll out electric two-wheeler later in time.

If the rivalry of this new Renegade Electric cruiser is concerned in the suggested price segment, it will compete with the likes of the Harley-Davidson Street 750 and Kawasaki Vulcan S.