The 2019 Yamaha FZ S ABS that is all geared to launch on January 21 recently spotted at a dealer yard. The motorcycle was available in a number of colour options including black and a blue. From the leaked images, it is evident that the motorcycle gets a new headlamp setup with two sections, lower for being low beam and a higher section for the high beam respectively. Other than this, the new FZ S gets new turn indicators, front fender, fuel tank with tank extension similar to the Yamaha FZ 25, a single piece seat and new exhaust unit among others.

2019 Yamaha FZ S ABS stands on 17-inch alloy wheels wrapped up with 100/80-17 front and 140/60-17 rear tubeless tires. The motorcycle gets suspended over telescopic forks up front and a rear monoshock. From the set of spy images, it is clear that the next generation FZ S is equipped with going to be a mandatory feature of ABS. However, it is uncertain whether it is a single channel or a dual channel ABS unit. 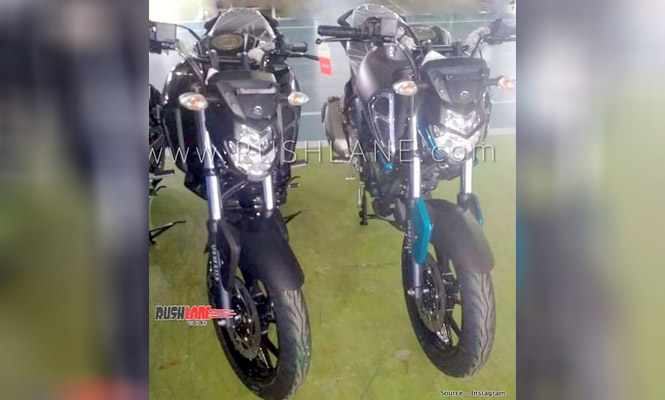 On mechanicals, the new FZ S ABS will continue to be powered by similar 149cc, fuel injected engine from the ongoing model. However, the engine which is capable of producing 13 bhp at 8000 rpm and 12.8 Nm at 6,000rpm, will comply with the BS-VI emission norms. The power transmission is handled via a mated five-speed gearbox. The engine is being expected to return the fuel efficiency of 45 kmpl in city conditions and 55kmpl on the highway.

The pricing for the new FZ S is revealed officially yet nevertheless we could expect a hike of INR 5,000-10,000 premium over the current model for ABS inclusion. In terms of rivalry, the motorcycle will see the competition with the likes of Suzuki Gixxer, Honda CB Hornet 160R and Bajaj Pulsar NS 160.