Yamaha FZ-S FI Version 3.0 Vs Version 2.0: Find out the Differences

Yamaha Motor India has launched the 2019 FZ-S Fi Version 3.0 in the country. The Japanese bike maker asks for INR 97,000 (ex-showroom, Delhi) pricing for this third generation of well-known naked streetfighter in the 150cc-160cc segment. Updated for the 2019 calendar year, the motorcycle went under the knife to get this avatar with a host of new additions. Here in this post, we are focused to highlight differences between the previous generation Yamaha FZ S Fi and the 2019 FZS Fi Version 3.0.

The first to get noticed headlamp on the 2019 FZS Fi is an all LED unit. It incorporates a reflector with ideal light projection and separate bulbs for high and low beam. The combination here offers excellent visibility over a wider range with less distortion. 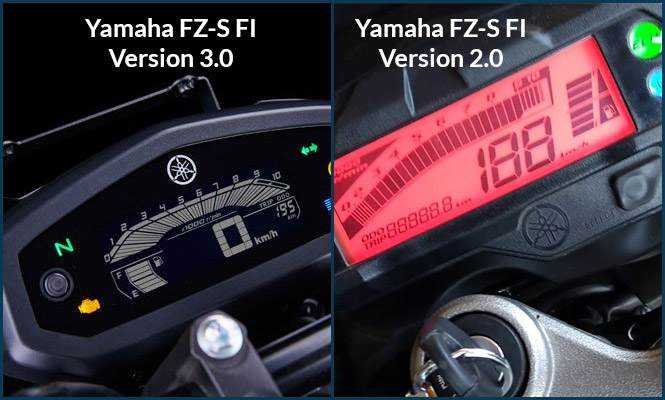 The body language of the new FZS Fi has been intensified over the earlier model. It now features a forward massive stance which expresses a hidden sense of power. It is attained via sculpted fuel tank with pushed forward look, two-level single seat, compact tail assembly, stubbier exhaust and others. Somewhere it seems like drawing design inspiration from its elder sibling, the Yamaha FZ25.

The seating on the reworked FZS Fi is a single piece unit as compared to split step-up unit on the outgoing model. This two-level seat comes with an excellent feel of fit and cushioning blends well with an upright, relaxed riding posture.

The safety on the 2019 FZS Fi has been improved with the introduction of single-channel ABS and a rear disc brake. This amalgamation of these top-shelf components provides improved braking with better stability and control at all speeds.

Well, the powertrain is a carried forward unit from Version 2.0. An air-cooled, 4-stroke SOHC, fuel-injected "BLUE CORE" engine. However, the automaker made shorts of electronics adjustments for a refined power delivery while overtaking and a feeling of superior initial acceleration. The power figures and the gearbox unit are the all same units.