The leading tech brand Lenovo has finally brought Tab 2 A7-10 tablet on Indian soil after unveiling the same at CES in Las Vegas. The device has been appeared to list its name in the fray of budget devices. The company has made it available at the price of Rs. 4,999. Snapdeal is the exclusive seller of this Lenovo tablet in India.

At the time of the launch of this device, one more tablet had been showcased there named Lenovo Tab 2 A7-30. However, this device is far away from the launching in India. Let’s talk about the Lenovo Tab 2 A7-10 which flaunts a 7-inch display. However, it lacks in the screen resolution with 1024x600pixels which translates into 170ppi pixel density, not nice for a 7-inch bigger display. 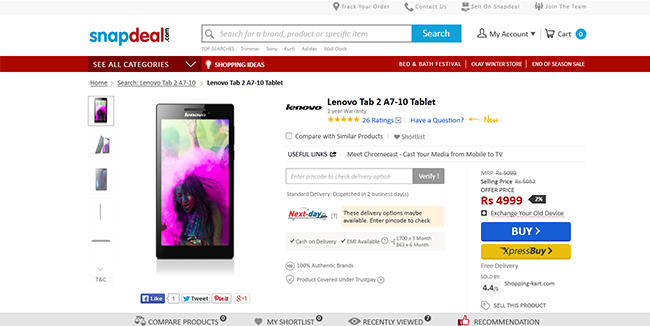 On the software front, it supports Android 4.4 KitKat OS which is said to be upgradable to Android Lollipop. Going more inside the tablet’s specs what we have received is a quad-core MediaTek MT8127 processor which is clocked at 1.3GHz to power the device for faster performance. Lenovo has paired this budget device with 1GB of RAM which makes the multitasking smooth and efficient.

Though, Lenovo Tab 2 A7-10 will disappoint on the camera module as you have not found rear imager for solving the picture-taking experience. However, a selfie camera of 0.3-megapixel clarity will make you little bit relax. The tech giant as expected never disappoint on the battery side, a 3,450mAh unit is enough amount to give a boost of energy to the tablet.