After giving an elegant-looking flip smartphone, Galaxy Golden to the world of smart devices, now Samsung is bringing its new successor. Here, a Dutch website has leaked a brochure that is clearly hinting about the arrival of new high-end Flip Phone, called Galaxy Golden 2. Notably, before an official announcement, the informant has tipped out several specs and features of this yet-to-be revealed smartphone.

If the surfaced images over the cyberspace is to be believed, then the handset is retaining same Dual-screen Super AMOLED display just like its predecessor. But, it will bear a bigger screen size of 4.6-inch that is expected to deliver a pixel resolution of 768x1280p.

As per the reports, the forthcoming hanheld will confer a 16-megapixel rear snapper with LED flash alongside a 2-megapixel selfie sensor. Also, both webcams may have a caliber to record videos in 4K as well. Peeking on the listing of above mentioned site, then the device might be power packed with Google's Android KitKat 4.4.4 operating system. 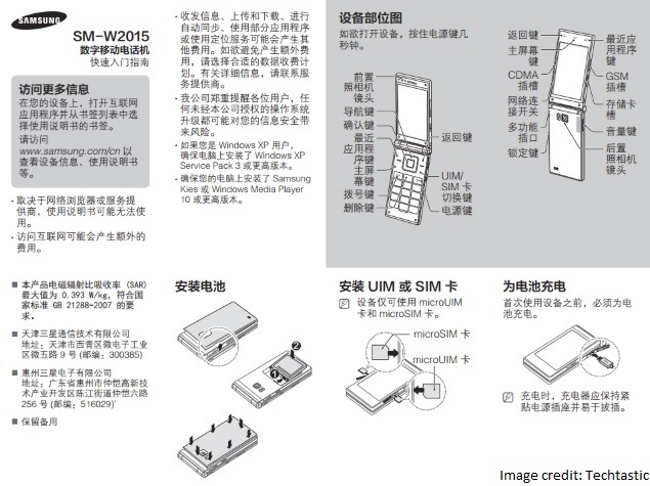 Moreover, the unannounced handset has been claimed to support dual microSIM slots as well as envisaged to be paired with 2GB of RAM. In terms of performance, the Galaxy Golden 2 will be engineered with a powerful quad-core Snapdragon 801 Krait 400 SoC that is clocked at 2.5GHz operating frequency. However, the inclusion of an Adreno 330 GPU is also speculated, while rest of the specs are still unspecified.

The sources are also asserting that the successor to the Galaxy Golden will be debuted in China via the mobile carrier: China Telecom, but there is no word on its arrival in other territories.

Samsung Flip Phone Expected to Unveil By End of This Year
Views: 859