The arena of budget smartphones is getting bigger with each passing day. Every tech company is busy in manufacturing smartphone devices with quality features, maintaining the affordability. In this fray, the Chinese juggernaut Lenovo had introduced K3 Note which has been now reached to Indian soil at just Rs. 9,999. At this competitive price tag, company has given the tough competition to several other handsets under the same price segment.

Well, this handset will go on sale from July 8, but the registration for it has already begun on Flipkart from Today. Lenovo understands the importance of our nation in growing its smartphone business. Numbers of smartphones are already celebrating the success in India. Now, K3 Note has also come to build the same success story in country. 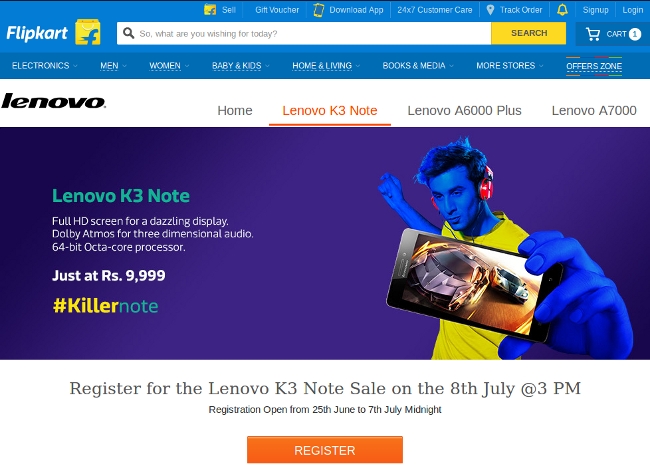 This dual-SIM device gets a 5.5-inch display which provides full-HD screen resolution, having 1080x1920 pixels with pixel density of 401ppi. This handsets comes with LTE connectivity which is compatible with both bands - FDD-LTE 1800MHz Band 3, and TDD-LTE 2300MHz Band 40.

Lenovo K3 Note functions flawlessly with Android 5.0 Lollipop which is adorned by company’s custom Vibe UI for customize user experience. Company has used MediaTek’s 64-bit MT6572 1.7GHz octa-core processor for fast performance which is coupled with 2GB RAM for seamless user experience. On the other side, the internal storage has 16GB space for data which is further expandable to 32GB via microSD card.

It is fueled by a 3000mAh Li-Po battery which works like a powerhouse for the phone with a promise to deliver 36 hours of talktime on 3G network. On imaging side, a 13MP rear shooter behaves well with dual LED flash. A 5MP front snapper is also on-board for best selfie output. This handset is available in Onyx Black, Pearl White, and Laser Yellow colors. It is 7.99mm thick and 150 grams heavy which makes it easy to carry device.

The Feature-rich Lenovo K3 Note to Enter in India on June 25
Views: 737