The homegrown mobile maker Micromax seems to expand its business in the low-cost Android devices’ market. The Company is planning to launch its next Bolt series smartphone, dubbed Bolt A067. A Mumbai based retailer, Mahesh Telecom has informed that it will soon launch officially at the price of Rs. 3,899. However the unannounced Micromax smartphone is available to buy from some retail stores.

Images of Micromax Bolt A067 with specs can be seen in a Facebook post. One image has few specifications and other is showing the phone’s front panel. As per the Facebook post, the device runs on Android 4.4 KitKat platform and has a 1.3GHz dual-core processor (unspecified chipset). It features a 4-inch WVGA display that offers 480x800 pixels screen resolution. 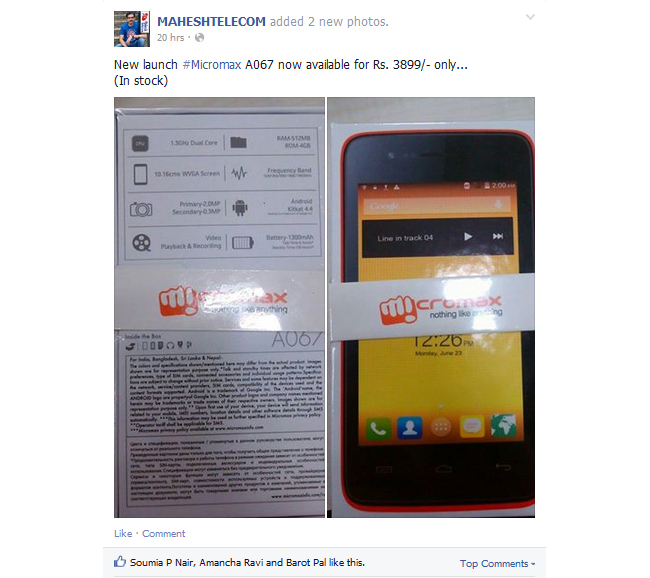 It is said that the yet to be launched smartphone comes equipped with 512MB RAM, which seems uite inadequate for solving the multitasking purpose. But, looking at its price tag, we can say that it will be okay for this device. On the storage front, a 4GB of built-in storage comes mated along with the option od microSD card slot, which can store upto 32GB data.

On the imaging side, a 2-megapixel rear camera is quite disappointing in the era of megapixels along with the average 0.3-megapixel front snapper. It is backed by 1300mAh battery. That’s the specs, which we have received from the Facebook post. Not any other detail is now out. However, Company itself has not spoken a single word regarding its specifications, price and availability. What connectivity options will be provided by the manufacturer with this smartphone is also obscure except the GPRS/ EDGE support. The handset is engineered with capacitive navigation buttons.