The domestic tech company Micromax seems ready to hit the market with a complete new range. The tech giant has recently released an invite for its April 30 event which will bring something more innovative and smart in tech industry.

Invite suggests about the something big in tech with tag Micromax Next Smart Thing. If goes with the invite, it is speculated that Micromax will bring smartphone, tablet or a smart TV in partnership with Intel. Logo of Intel is posted on one teaser and another teaser has a logo of Windows which is suggesting for some Windows powered device. 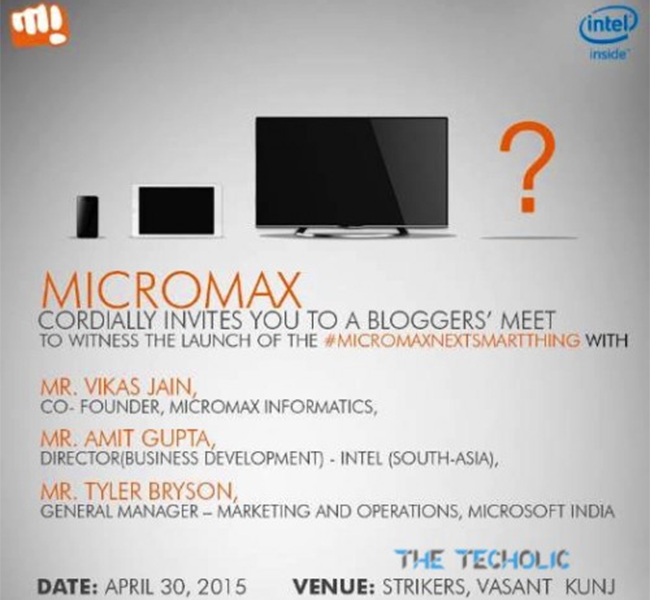 Well, the invite reads, "To witness the launch of the #Micromaxnextsmartthing." A teaser to promote the same had also been posted with lines, "The Next SMART Thing is Coming Soon." Well, now it is hinted by the homegrown tech major that India will see a device which will run on Windows platform and will support Intel’s chipset.

Well, we cannot ink a confirmation mark as it could be hybrid tablet, laptop or an HD TV. Take them as a pinch of salt as we cannot say anything for this event. All will be known when the event will fire the floor on April 30. Earlier, the tech giant had brought two stunning devices with Android Lollipop support named Canvas Play and Canvas Spark at very affordable price.