The leading tech giant Motorola has introduced its successful smartphone’s 64GB variant for US market. The unlocked Moto X (Gen 2) 64GB model has been reached to US. Also called as Pure Edition, this handset will cost $100 more than the 32GB model and can be purchased at the price of $599.99. While the same with leather or wooden back panel can be grab at the price of $624.99.

The Company has tweeted on its official Twitter account, "New 64GB #MotoX Pure Edition now available. Store more for just an extra $100 off-contract." Calling this unlocked version a Pure Edition is just to add some fanciness in its conventional naming convention. On one side, the smartphone is being sold in 16GB and 32GB variants for all the other markets. While the US market could get the chance to experience the bigger storage model. However, Company has not spoken a single word regarding this Pure Edition handset’s availability for other markets. Hopefully, we could expect its arrival in India soon. 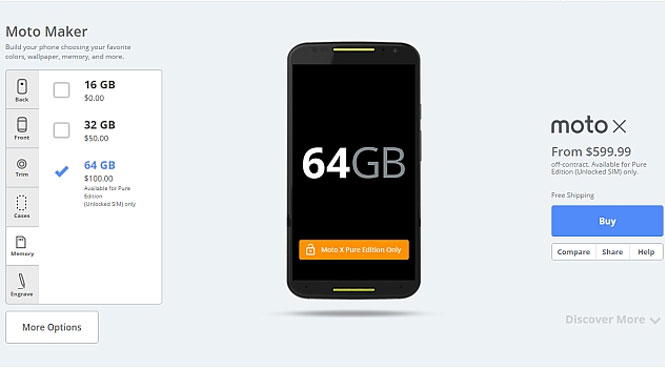 India has recently received the 32GB Moto X (Gen 2) to taste at Rs. 32,999, which is available on Flipkart to buy along with the option of 16GB model also.  The price for the lowest storage variant has been reduced after the launch of 32GB model. Now, you can pick the 16GB at Rs. 29,999 only.