Will HTC bring Sense 7 UI for Hima with Android Lollipop Next Year?

The leading Korean mobile manufacturing Company HTC is reported for working on the new version of its Sense UI. The Company will bring the Sense 7 custom UI in 2015 for its all launched flagship devices of this year.  The next update for customization purpose will be reported by a developer LlabTooFeR who said that the seventh version will roll out for all premium HTC devices between months of May and July 2015.

On one side, the Korean tech giant is making its way to release the Android 5.0.1 Lollipop update for its flagships One M7 and M8, which will still bring this Android update with same Sense 6. On the other side, the rumoured HTC Hima will reportedly launch with the seventh version of its custom UI on top of Android 5.0 Lollipop. However there is no information that the same will bless the 2013 year’s handsets or not. 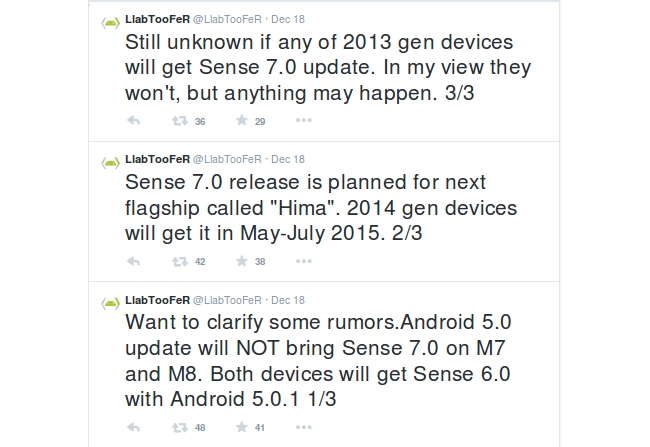 We have no idea about what this new version of its custom interface will offer, but we could expect that something new and more innovative we will receive with such version. The company had brought the Sense 6 on One M8 earlier in 2014 which is based on Android 4.4 KitKat platform. This brought several customization features like arrays of color themes, fonts, transparency effects, updated Gallery, apps and many more. Now, the Sense 7 will bring more advanced than the previous which will be based on Android Lollipop.

HTC Hima which is also known as One M9 was leaked earlier with some specs which include 5-inch full-HD display, 20.7-megapixel rear snapper, 13-megapixel (or 4-megapixel UltraPixel) front shooter, 64-bit Snapdragon 810 processor, 3GB of RAM, Cat. 6 LTE connectivity, 2840mAh battery, and the most important Android 5.0 Lollipop with Sense 7.0 UI.