After facing the ban in India for infringing Ericson’s SEP, the Chinese mobile maker Xiaomi is bringing its Redmi Note 4G smartphone in country as the Company has allowed selling selected devices in Indian market. So, here is the 4G enabled smartphone which is ready to go on sale on December 30 maintaining its flash sale custom.

The sale will begin at 2PM on Flipkart as expected. Registration has been started and it will be opened till December 29 midnight. However, how many units of the Redmi Note 4G will go on sale is not confirmed yet as the Company has not spoken single word on this. Company has set the price of Rs. 9,999 for this 4G model while the 3G model of Redmi Note is priced at Rs. 8,999. Unfortunately, the 3G model will no more be sold by the Xiaomi due to Delhi High Court Prohibition Order. 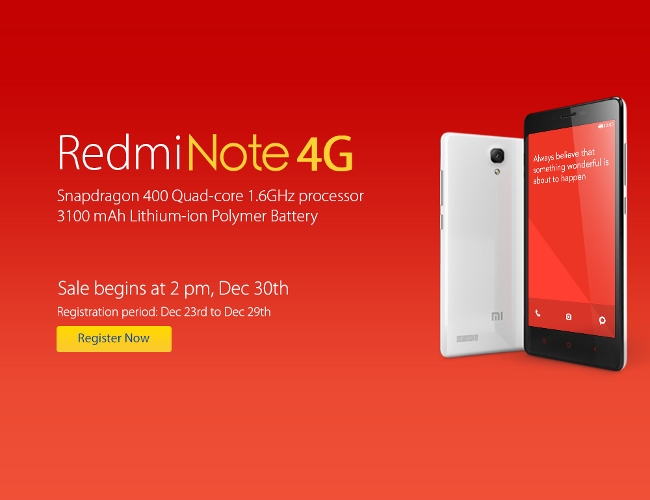 Xiaomi was ordered to stop selling its devices in India. Later to release some tension, it was allowed to sell Qualcomm based devices. The 4G version is powered by a 1.6GHz quad core Snapdragon 400 processor while the 3G version has 1.7GHz octa core MediaTek processor. It comes with 4G LTE connectivity and single SIM slot. Xiaomi Redmi Note 4G runs on Android 4.4 KitKat OS with company’s own MIUI V5 on top while the 3G model supports Android Jelly Bean. It flaunts a 5.5-inch HD IPS display that offers 720p resolution.

Things You Should Know About Xiaomi Redmi Note 9
Views: 13261