The Honda Livo is an iconic motorcycle which has so much potential in terms of performance and riding quality. The Livo rides on the Honda’s trustworthy engine displacement which produces dynamic power output as well as mileage. In terms of design, it is an all-new motorcycle which wore impressive livery. The motorcycle looks very stunning and fresh with its chrome heat shield, side cowl, exhaust muffler, impressive tail light and alloy wheels. The angular headlamp and side fairing is well defined about the beauty. The analogue instrument console is inspired by the Dream series, which consist of speedometer, odometer and fuel gauge. Some of its pros are given below:

Everything is pretty much good about the Honda Livo, but the lack of Combined Braking System might be dropped its popularity in its category, whereas the top speed is 86KMPH, which is also in a downside. Some of its cons are given below:

The handling and riding quality of Livo is pretty much impressive, as the motorcycle is featured with a lightweight handlebar and a wide seat which make it best in its class for a comfortable ride, whereas the power and performance are the important key aspects that meet you with its dynamic ride quality.

The technical specifications of Livo are shared from its other sibling that also rides on a 110cc engine. Thus, the Livo is powered by an air-cooled, four-stroke and 110cc engine displacement which oozes healthy power and torque. The 110cc SI engine returns 8.2 BHP of power at 7500 RPM and 8.63 Nm of torque at 5500 RPM. All the power output sent to the rear wheel via a four speed transmission. Moreover, the motorcycle is featured with Honda Eco Technology which is best in this category. The top speed of Honda Livo is 86 KMPH. Some of its power to the mileage features are mentioned below:

The Honda Livo is featured with front disc brake and rear drum brake which are good for safe and comfortable braking, while the suspension duties are performed by a front telescopic suspension and rear Hydraulic spring loaded suspensions. Thus, the lightweight handlebar will never disappoint the rider. It has high beam headlamp which is also good for night riding. Some of its safety features are mentioned below:

The Honda Livo Disc Alloy is the top variant which is featured with front disc brake. It is the best motorcycle in its range, which offers dynamic features and impressive look. If you are looking for a new motorcycle, then the Honda Livo will be the best option in this category. 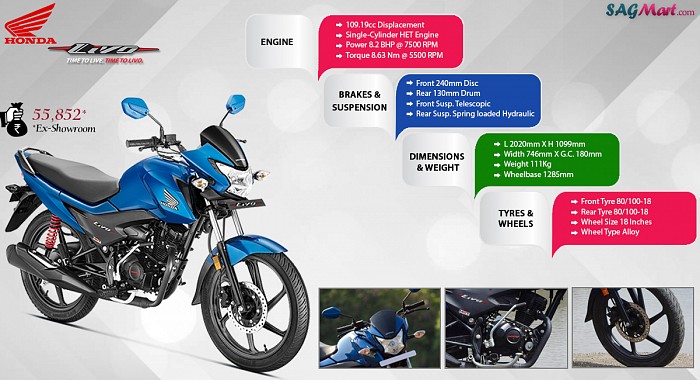 Other Models of Honda Motorcycles