Yamaha Fascino is a lavishly styled scooter in the commuter segment, offered by the Japanese two-wheeler maker. The Italian touch curvy cues and the body figure give this scooter a different outlook. The newly fabricated headlamp, blinkers and the grille over the front apron turned out to give it a head-turner look. The little touch of chrome amplifies the beauty and simplicity of the scooter. The rear portion is an eye-candy with the grab rail and tail-light.

The Yamaha has brought a new scooter- Fascino, which is the fourth scooter after the Yamaha Ray, Ray Z and Alpha. The Fascino is based on their Nozza Grande, which rides on a 125cc engine. The scooter has a wave shape stance which carries some chrome finish over the body panels. The scooter comes equipped with a 113cc engine that endow a smooth power output and acceleration. Few of its pros are mentioned below:

Yamaha Fascino is coupled with an 113cc single-cylinder air-cooled and four-stroke engine that delivers 7.1 PS of power at 7,500 RPM and 8.1 NM of torque at 5,000 RPM. This engine features Yamaha’s reliable Blue Core technology that has been used to deliver more power and fuel efficiency. Yamaha claims that the new Fascino scooter delivers 66 KMPL mileage, which is the highest claimed by any scooter in India. Few of its power to mileage features are given below:

The company claims that the Fascino gives excellent sitting position to the rider as the motorcycle has a wide cushioned seat that is very comfortable for the two people. The handlebar is quite ample for a city ride, while the Yamaha Fascino weighs 103 KG and seat height is just 775mm which makes it quite accessible in city traffic. The scooter measures ground clearance of 128mm which prevent the scooter from the damage of the body.

The underbone frame has been linked with a unit of rear swing-arm and a telescopic front fork, which make it very easy to handle. The tyres are of tube type and wheels are retarded by drum brakes that increase road holding performance on all types of road conditions. It has a wide cushioned seat which is pretty much comfortable for a long ride. Few of its safety features are given below:

The Yamaha Fascino is one the top most fuel efficient scooters in this segment, whereas the price of this scooter is very affordable. The retro design, class leading fuel economy and blue core technology will help to make its position in the Indian two-wheeler market. The scooter is being sold in the county in five attractive color options such as Rouge Red, Sassy Cyan, Haute White, Cool Cobalt and Tuxedo Black. 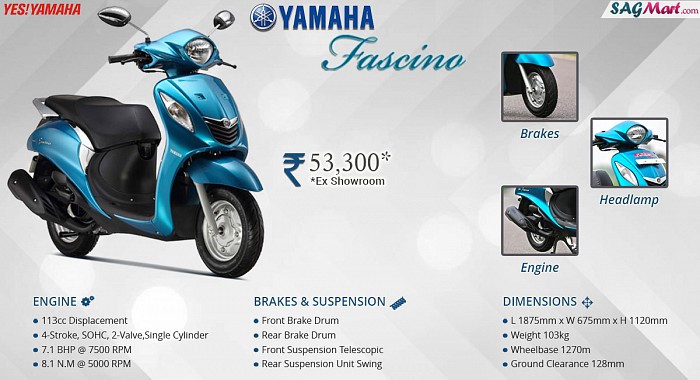 Other Models of Yamaha